In January, 2016, a group of emergency relief experts from Indonesia joined their counterparts from India and Sri Lanka in a six day disaster and emergency education seminar in Israel
This is part of a major new initiative between the Jewish state and Muslim-majority states outside the Middle East.

Iswar Abidin, a disaster management consultant from Jakarta revealed his reaction when he received the opportunity to visit Israel.

“It was very shocking, but I said to myself ‘OK, let’s do it!’ I think it’s something new and challenging.”

For Trinimala Ningrum, the secretary-general of the Indonesia National Platform for Disaster Risk, all she had ever heard about Israel was war and terrorism. This was echoed by all of the mainly Muslim delegates who admitted they had to google Israel and Judaism to learn about the country they were about to visit.

Asian countries don’t carry the baggage of anti-Semitism that some European countries have.  Some of the participating countries are reaping the benefits of working with Israel in agricultural, water management, soil management and disaster relief projects.

The delegation’s visit to the Barzilai Medical Center was an eye, and heart, opening experience. Dr. Hezi Levy, the center’s medical director, explained the issues of running a hospital under emergency conditions such as prolonged terrorist and rocket attacks and dealing with the four essential needs of a disaster situation – cooperation, coordination, leadership and training.

As she left the hospital, Ningrum explained that she had never heard the impact of the conflict from the Israeli side before.

The impact of gaining a different understanding of Israel was considerable for the participants. Until then, everything had been one sided.

Muhammad Ali Yusef, the Chairman of the Climate Change and Disaster Management Institution of the Nahdlatul Ulama – the largest independent Islamic organization in the world – said he hoped to organize an event where he could tell the Indonesian National Platform for Disaster Risk Reduction of their findings in Israel.

Victor Rembeth, the national manager of the Indonesian Disaster Resource Partnership, said, “We Indonesians are blessed with your story and are going to tell it.”

In Rembeth’s view, the benefit of the seminar showed “how things can work” with the program’s “people-to-people approach” which has the potential to change the relationship between Israel and Indonesia.

There is a burgeoning connection between China and Israel.  It is based on a Chinese appreciation and respect for the Jewish state.

When I visited China, people expressed their appreciation of China and Israel as being countries proud of their ancient and historic cultures. They told me that look on Israel as “the Einstein Country.”

Their initial interest in Israel was academically focused. They were in awe of Israel’s advancements in mathematics and science and were keen to discover what set Israel apart.

Chinese academics and entrepreneurs have no interest and little patience with the anti-Israel brainwashing and propaganda that has entrenched Western campuses. They find nothing here that will advance China’s march to the future. What they do find positive and attractive is Israel’s accomplishments in essential fields of agriculture, medicine, science and technology-based industries and the commercial benefits to be derived from Israel’s brilliance in innovation. It is Israel’s ingenuity that attracts the Chinese and no amount of BDS nonsense will detract them from forging closer links with the Jewish state.

Closer to home, despite Israel’s criticism of the European Union’s double standards when it comes to conflict management, according to Carlos Moedas, the European commissioner for research, innovation and science, who also visited Israel in January 2016, Europe cannot do without Israel.

Speaking with Israel’s President, Reuven Rivlin, he said, “I love this country. I hope the cooperation between Israel and Europe will increase. For us, and for our scientists, it is extremely important. During my tenure I hope to be here for you, because you have been here for us in terms of everything in science and innovation.”

He went on, “I want to be a little bit of your voice in terms of the great people I have met here and the many innovators and entrepreneurs. The drive and energy that you have in this country to create businesses is unique and is an example to Europe. I am here to tell you that I hope this cooperation will increase. Four us, and our scientists, it is extremely important.”

Israel has received 330 research grants with a value of up to three million Euros from the European Union. Two hundred of these grants went to the Hebrew University and the Weitzman Institute alone.  To get this money you have to be uniquely good at what you do.

As Carlos Moedas explained, the EU knows how to turn money into knowledge; it is less good at turning knowledge into money. This is where Israel excels. There were over one thousand five hundred new start-ups established in tiny Israel in 2015.

Moedas is the overseer of the EU’s Horizon 2020, the world’s largest public research program. Israel only came on board in 2014 and is already a prime component and contributor to this European research platform.

Israeli hi-tech exits generated more than nine billion dollars in 2015, according to the IVC Research Center.

This is one of the reasons why NASDAQ, the world’s second largest stock exchange announced a joint venture with the Tel Aviv Stock Exchange (TASE) to build a private market for Israeli companies who are not yet ‘ripe’ enough to go public.  This will greatly assist Israeli companies as they grow from start-ups to fully-fledged enterprises and IPOs.


Barry Shaw is the Senior Associate for Public Diplomacy at the Israel Institute for Strategic Studies.
He is also the author of 'Israel reclaiming the Narrative' available on www.barrysbooks.info and from Amazon.

Posted by theviewfromisrael.com at 13:53 No comments:

THE SILENCE OF THE JEWS. 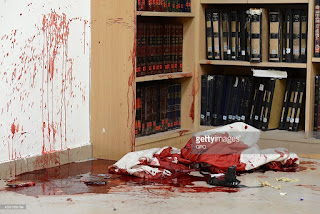 To the Jews of the World!

Israeli Jews are being stabbed and shot to death daily, and world Jewry remains silent.

You silence gives victory to the Jew-hating Arabs and their supporters.
Shame on you!

Left or right, to be a proud Jew, one that can raise his or her head, and not a shameful one,
you must rally and raise your voice.

To do nothing is not an option.
To do nothing leaves you a disgraceful and disgraced Jew.
Posted by theviewfromisrael.com at 09:42 1 comment: