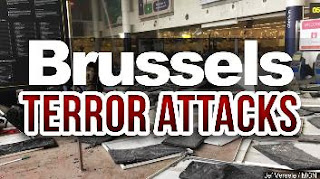 Western intelligence services repeatedly warned Belgium of a serious and imminent terror threat. They even gave the intended targets, the airport and the underground system, but Belgian security services failed to take the necessary preventative measures that may have stopped the huge loss of life and injury on March 22 in Brussels.

As one Israeli counter-terror expert told me, “they fell asleep on guard duty even after being told the enemy was about to attack them.”

Whether the Belgians either did not take the warnings seriously, or they did not know what to do with the intelligence, it does seem, when adding other cases of Belgian dismissal of counter-terror warnings that there is deep rooted problem in that country.

Last November’s deadly terror outrage in Paris showed that Belgium was the base of the terrorists operations.
A top US counter-terror official travelling in Europe was turned down when he requested to meet his Belgian counterparts. He was told that they were “too busy” investigating the Paris atrocity. (‘Belgium not cooperating with US on counter-terror efforts,’ Reuters, 24 March, 2016)

This brush-off was one small sign of US frustration over Belgian handling of their growing Islamic terror threat. This frustration has stretched to Turkey who, last year, deported one of the Paris suicide bombers, Brahim Abdeslam, back to Belgium. He, apparently, slipped off the Belgian security radar, allowing him to travel to France and perpetrate his deadly attack.

Worse still, Turkey detained Ibrahim El Bakraoui in June 2015. They notified the Belgian Embassy in Ankara the same month and then deported him back to Brussels the following month. The Turks reported that “the Belgians ignored our warning that this person was a foreign fighter” (i.e. terrorist).  El Bakraoui was released by the Belgium authorities. They claimed that “no links to terrorism” could be found, yet this man walked undetected into Brussels airport together with his brother pushing two trolleys containing the two heavy bombs that killed and maimed too many people.

This, and now the revelation that the Belgium authorities were warned that this was about to happen and they did nothing to prevent it.

There is something sadly delusional in Belgium. It is a dysfunctional country with two populations, speaking different languages, at  political loggerheads with themselves.

It thrives as the capital of European bureaucracy and is trapped by the thought-process and the system that this bureaucracy imposes on them. It is also trapped by the ideology that it has to show itself to be the supreme European example of progressive liberal socialist policies and philosophy. This has blinded them to the harsh reality of what has been playing out in their midst, and much of Western Europe, namely shunting a disillusioned and increasingly radicalized second generation youth into their ‘no-go zones’, a youth who, despite the social welfare benefits, resent the generosity of the country of their birth and wish to return to their Islamic origins not in the Middle East but in the place of their birth.

Against this backdrop Belgium, but certainly not confined to Belgium, put human rights, even for terrorists, before the human rights of their innocent civilians.

This may be the reason why they were so slow to act on the terror tip-off.  After years of condemning other countries such as America and Israel of offending their sensitivities in questioning terrorists, they couldn’t put themselves in the same situation even though they were warned of a ‘ticking bomb’ scenario. And so, they let the bomb go off.

They had the prime suspect in custody following the apprehension of Salah Abdelsam but they apparently did not extract the information from him. Despite this, they failed to act on the incoming intelligence that should have set red alert alarm bells ringing, especially as the targets were named.

The Belgium government has to prove itself more moral than morality permits. They claim they lose their humanity if they treat evil terrorist killers any differently than they would the ordinary man on the street. They are dangerously wrong. Charity, and humanity, begins at home by doing everything within their power to protect and defend the lives of their civilians above the rights of the stranger that comes to kill you. Human lives trump human rights.

Only three weeks ago, Belgium was warned in an EU report that untrained border guards at their main airport were failing to check suspicious passengers from high risk countries against the EU’s counter-terrorism database. (‘Belgium rebuked for chaotic passport control three weeks ago.’ Daily Telegraph, March 24.)

Compare that to Israel’s Ben Gurion Aiport with its eleven rings of security.

The source of the problem we saw in Paris and now Brussels is not what we saw happening in the last few months. It is what has been allowed to develop over the last fifteen to twenty years in Europe.
PC is the new political incorrectness.
Europe is beginning to become aware that warnings ignored for years have become deadly reality.

The havoc in their societies highlighted by the disaffected, the unemployed, the entitlement society, the rising crime rates, the rising voices of hate and resentment, the radicalization and the accelerating rate of violence and terror incidents, show that the socialist liberal politics simply have not worked. Opening their gates to a tsunami of migrants has put the final nail in the coffin of Europe as a compassionate society.

People do not leave the Middle East for Europe, they bring the Middle East with them into Europe. They bring with them their norms of thought and behavior. No amount of integration or tolerance can remove this inner self that leaves a resentment coming to the fore when all else fails.

This resentment is displayed in a rapidly growing polarization in the population of many European countries. This has been caused by the failure of liberal socialist policies when it comes to social cohesion and national and personal security concerns.

Barry Shaw is the Senior Associate for Public Diplomacy, Israel Institute for Strategic Studies.
He is the author of ‘Fighting Hamas, BDS and Anti-Semitism.’

Posted by theviewfromisrael.com at 11:15 No comments: