The Insanity of a Palestinian State. 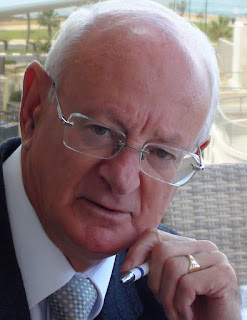 Incitement and anti-Semitic hate spewing out of the mouths of Palestinian leaders, empty words designed to perpetuate Palestinian self-promotion as the perennial victim when, in truth, they are only the victims of their own emptiness, the constant eruption of violence against Israelis from Palestinian Arabs raised to hate Jews and destroy Israel.

If anyone is so utterly unworthy of statehood it is the Palestinian Arabs.

Fraudulent history, internal divisiveness, wastage of massive global assistance, the diversion of international funding to propaganda purposes, incitement, lessons of hate, the financing and support of terrorism, their predilection to violence and the total inability to display to the world any respect for their neighbors, whether it be Israel from the Palestinian Authority, or to Egypt from Hamas and Palestinian Islamic Jihad.

How can any international diplomat or journalist worth his salt in honesty make out a case to grant this dysfunctional, inefficient, unwilling entity sovereignty?

A brief explanation of Palestinian terrorism shows the inanity of such a proposition.
The spectrum and ideologies of Palestinian terrorism range from Hamas and Islamic Jihad, which are both Islamic terror organizations pledging allegiance to the creation of an Islamic state under Sharia law, to the Marxist PFLP (Popular Front for the Liberation of Palestine). This is the largest group in the Palestine Liberation Organization of which most of the Palestinian Authority leaders, including Mahmoud Abbas, belong.

Both terror organizations are openly bent on the destruction of Israel and have founding charters declaring this aim.
So the establishment of a Palestinian state would comprise two major terror organizations, one Islamic, the other Communist, currently at logger-heads with each other but united in their desire to see an end of Israel, regardless of signed agreements.

And yet, the world has nothing to say about this apart from their ridiculous belief that the creation of Palestine is the only way to achieve peace!

A little known dangerous fact that more knowledgeable two-staters prefer to keep under wraps is that in the case of Mahmoud Abbas stepping down as Palestinian president or dying while in office, his replacement would be the speaker of the Palestinian parliament - and he happens to be a member of HAMAS!

This is supposed to be for an interim period, but we know that Abbas was elected for a 4 year term and that was way back in 2004!

So much for Palestinian obligations to abide by the rule of law and respect the democratic process. Can we expect any better from Hamas? I think not.

Can anyone doubt another certainty wrapped in silence that, either by the ballot or by the bullet, Hamas will take control of this new Palestine? So I ask my diplomatic contacts, is this the new peaceful state you have expended your energies on establishing for several decades?

By the way, the Palestinian parliament hasn't sat since 2007.

This is the Palestine that naive liberal Westerners are so frenetic to create?
Give me a break!

Marwan Barghouti sits in an Israeli jail. He is serving five consecutive life sentences for orchestrating the murder of Israeli civilians in Jerusalem, Tel Aviv and Givat Zeev, and injured others.

The Palestinian Fatah party of Mahmoud Abbas calls his imprisonment a “war crime.” Now the Palestinians are running a global campaign to have this unrepentant murderer nominated to receive the Nobel Peace Prize no less.

Why not, the Norwegians gave one to arch-terrorist Yasser Arafat who launched his fatal intifada after flying to Oslo to pick up his award.

This campaign on behalf of Barghouti is supported by Adolfo Perez Esquivel, an Argentinian who is called a pacifist and a human rights activist and who was himself awarded the Peace Prize back in 1980. You really couldn’t make up such an insane story.

Barghouti is also touted as the leading candidate to replace Abbas and has been endorsed by Saeb Erekat.

Is this the best alternative the Palestinians have for their next president? Well, sadly, yes it is, unless they vote for Hamas.

Barghouti’s election to be the next Palestinian president, irrespective of him receiving the nonsensical Nobel Peace Prize, will further perpetuate the conflict.

In the meantime, the Palestinian on Palestinian violence continues. A Palestinian Fatah official, Fathi Zaydan, was killed by a bomb in Mieh Mieh, Lebanon, in a camp operated by UNWRA. This place has been the scene of numerous violent disputes between rival Palestinian factions. In Gaza, members of the Popular Front for the Liberation of Palestine (a title which stands for the elimination of Israel) burnt images of Mahmoud Abbas.

Palestinian society is, within itself, divisive and violent.

Putting aside the moral inversion of Western governments applying one-sided pressure on the only liberal democracy in the Middle East in order to establish another Arab state that cannot decide which way it wants to go, one need question why apparently reasonable logical-thinking European diplomats can abstain from United Nations resolutions brought to the vote by Palestinian-supporting regimes proposing that Israel is the world’s worst offender on women’s and children’s rights as well of other obnoxious allegations.

Why do they not, in all honesty, object to such slanders and vote against these preposterous proposals? Where is their political morality? Why do they close their eyes to these obsessive assaults on Israel?

Currying favor to these Israel-hating regimes is not an option for those who try to tell us of their commitment to a better Middle East.

Neither is the lack of interest in the diplomatic world of the consequences of a Palestinian state gone wrong. Too many diplomats have told me that “it is up to the parties to make an agreement work.”

Sorry, not good enough!
They cannot force their “solution” to the Palestinian problem on the parties and simply walk away when the consequences hit the proverbial fan. It will be primarily Israelis, but also the Arab citizens of this errant forced-birth state, that will inevitably suffer those consequences, and Israel would suffer them from a strategically weaker position that where we are right now.

All in all, the consequences of the establishment of a Palestinian state, based on the reality of Palestinian politics and Palestinian society, are too intensely frightening to be seriously considered.

Barry Shaw is the Senior Associate for Public Diplomacy at the Israel Institute for Strategic Studies.  He is the author of ‘Fighting Hamas, BDS and Anti-Semitism’ and was the co-founder of the Netanya Terror Victims Organization.