There’s Blood in the Water. 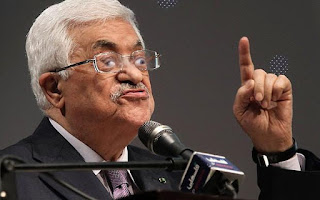 A Palestinian anti-Semitic  blood  libel about Israel and water.

A double crime was committed when Mahmoud Abbas, the Chairman of the Palestinian Authority, an interim self-governing body that undemocraticaly controls the Arabs in sections of Judea & Samaria, spoke before the European Parliament on June 23.

In his speech he spouted a Jew-hating blood libel as medieval in its words as those that led to the massacre and isolation of European Jews in the 14th Century.

Having begun his speech by condemning incitement to violence, he inexplicably said;

“Only a week ago, a number of rabbis in Israel announced, and made a clear announcement, demanding that their government poison the water to kill the Palestinians.”

Here was the Palestinian Arab leader in the European Union capital accusing Jews of poisoning wells, and here the second crime was committed.   The European law-makers received his poisonous words with a standing ovation!

When Abbas refused to meet Israeli President, Reuven Rivlin, who had extended an invitation to meet as both leaders were in Brussels, his refusal was met with silence rather than an encouragement to meet by Federica Mogherini, the European Union’s acting foreign minister.

So much for the European push for peace that targets Israel but ignores a constant Palestinian non-compliance.

Anti-Semitic slanders are not something new to Mahmoud Abbas. As a younger man he won his degree in Moscow based on a thesis that the Zionists were in cahoots with Hitler and the Nazis. An oblique addendum to Abbas’s 1982 doctorate, which he repeated as recently as 2013, were recent claims by British Labour Party rogue, Ken Livingstone, that “Hitler supported Zionism” in 1932 before going “mad and killing six million Jews.”

When Mahmoud Abbas was exposed, days later, unusually by the New York Times, for inserting lies about non-existent rabbis calling on the Israeli government to poison wells, he recanted but, by then, the damage had been done. Or, more accurately, he had already achieved what he intended in Brussels, namely to score more points against Israel in the international arena.

NYT’s journalist Diana Hadid wrote that the false accusation quoted by Abbas was fed through the PLO website and taken up in Turkey and across the Gulf Arab states.

This is the man who, in September 2015, described Jews on the Temple Mount as “filth.”

“They have no right to defile it with their filthy feet. We will not allow them to, and we will do everything in our power to protect Jerusalem.”

In other words, keep Jerusalem Jew-free.

But what did he mean by “we will not allow them” and “we will do everything in our power to protect Jerusalem.”?
He went on, "We bless every drop of blood that has been spilled for Jerusalem, which is clean and pure blood, blood spilled for Allah, Allah willing. Every Martyr (Shahid) will reach Paradise, and everyone wounded will be rewarded by Allah."

Jew hatred incitement is followed by call to action, to terror, to blood-letting.

And Abbas continued his project in front of rapturous but ignorant European leaders in Brussels with his blood libel of Jews poisoning wells.

Here are the facts.

Every year, the European Union buries the Palestinians with over a billion euros, even as the European economy goes into austerity. Instead of their money going into much needed infrastructure like water development and management, they allow it to be used for propaganda and wild accusations such as Israel poisoning Palestinian wells.

European governments eagerly receive false reports from well-funded NGOs slandering Israel on a whole host of issues and then use these reports as gospel truths about Israeli infringements. These reports made their way into United Nations chambers in which Israel is condemned in never ending anti-Israel resolutions to which the gentile Europeans abstain in the voting to hide their shame.

Not that anti-Israel Israeli NGOs are clear of guilt. Many also are funded by European governments to lie and to incite protests and violence.

A hidden camera video, taken by a member of the Ad Can organization, exposed Yehuda Shaul, the leader of the discredited Breaking the Silence group, telling a group of avid anti-Israel haters the lie that in the ancient Jewish town of Susiya the Arab villagers had just returned “because a few years ago the settlers basically poisoned all the water systems of the village.”

The Gulf News article dealing with the Palestinian  Authority poisoned wells issue claimed that Breaking the Silence had made the accusation, a claim the anti-Israel Israeli group told the Ha’Aretz newspaper they denied.

Another water libel came from Roy Yellin, the public relations director of B’tselem, an anti-Israeli Israel NGO well-funded by the Europeans who tweeted that “while Palestinians suffer from severe water shortage, settlements swimming pools are full.”

As with all anti-Israel allegations, the perpetrators deliberately tilt facts to favor their propaganda by eliminating nasty truths that spoil their emotional imagery. In Yellin’s case, he failed to disclose the fact that Arabs were happily splashing around in the Palestinian water parks that have been constructed throughout Judea & Samaria. Not to mention the amply supplied swimming pools in many of the private Palestinian villas.

Perhaps somebody should have informed the misguided European parliamentarians that the Palestinian leader that appeared before them has continually rejected Israeli efforts to uphold the signed 1995 water agreement between Israel and the PLO in which both sides would act to improve the water infrastructure in Judea & Samaria.

Wipe these uncomfortable facts off the agenda. Better that Abbas is allowed to continue his vile propaganda, wrapped in anti-Semitic verbiage that is warmly welcomed in Brussels.

Better emotional imagery of victimhood catering to European money than the harsh truths of a corrupt and hateful Palestinian leadership leading the Europeans blindfolded to the bank.

Barry Shaw is the Senior Associate for Public Diplomacy at the Israel Institute for Strategic Studies.
He is the author of ‘Fighting Hamas, BDS and Anti-Semitism’ and the new book ‘BDS for IDIOTS.’