The Security Council vote was not about settlements. 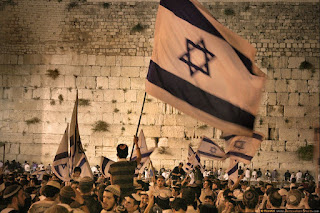 The Security Council vote was not about settlements. It was about something far worse.

The UNSC vote was not about “settlements.”  It was an Arab subterfuge, a trap into which the United States, the UK, New Zealand and other naive or cynical diplomats took an active role.

It was all smoke and mirrors, a con trick holding up the settlement issue to dazzle the voters while the real intent was to disown Israel of territories to which they have genuine claim and turn them into “illegally occupied Palestinian territory.”

For certain, President Obama latched on to the idea. It was pay-back time, a golden opportunity not to be missed to hit back at Bibi before handing in the keys to the White House. For shame!

Now we know that Obama was cooking up this evil brew back in November.

Not too many people noticed that Obama’s Secretary of State sneaked into New Zealand in November for a quick visit. The visit was to discuss the impending Security Council meeting. The press was given to believe that the burning issue was Syria, but nobody is putting it past Kerry that he didn’t get into a huddle with Kiwi leaders about supporting this anti-Israel settlement resolution. New Zealand has a seat in the Security Council.

When Egypt withdrew their sponsorship of the anti-Israel proposal due to the intervention of President-Elect Trump it probably took nothing more than a quick phone call to get New Zealand to step up and join Malaysia, Senegal and Venezuela in sponsoring the treacherous United Nations act.

That Obama’s finger was all over it was confirmed by Israel’s Prime Minister, Benjamin Netanyahu.

Obama was pulling the strings but it was the Palestinian/Arab narrative that was written into the resolution. Israel’s voice, its legitimate rights and claims to all or parts of the territory, were ignored.
So, how did it go beyond the issue of settlements?

The wording of a flagrantly biased resolution wrongly claimed that “settlements in the Palestinian territory occupied since 1967, including east Jerusalem has no legal validity and constitutes a flagrant violation under international law.”

This is blatantly incorrect.

Resolution 242 acknowledged Israel’s right to protect itself and live in peace within secure and recognized borders. Although the UNSC resolution restates these essential prerequisites it has the chutzpah to impose where these borders should be by renaming anything beyond the so-called 1967 lines “occupied Palestine territory.”  As such, the Security Council converts a false definition into international law.

It also ignored ongoing Palestinian belligerency (terror) and their absolute lack of respect for and acknowledgement of the sovereignty, territorial claims and political independence of every State in the area to live in peace, particularly Israel, as demanded in UN Resolution 242. Formally, the UN Resolution 242 was sent to and approved by the Security Council. They have now obliterated these commitments. Packed with demands of Israel to meet specific obligations, it makes no such demand of the Palestinian Authority and not of Hamas. Actually, Hamas is not mentioned once. It is as if Hamas didn’t exist.

There are international laws that permit states to retain territory acquired in wars inflicted on them by aggressive enemies for the defensive state’s security and its citizen’s safety. That was the case of Israel which acquired territory in defensive wars against invading Arab armies.  This gives international legitimacy to Israel’s claims to territories gained not in one war of aggression against the Jewish state (1948) but two (1948 and 1967).

All this was ignored by a Security Council determined to plough its way to legal impositions against Israel in their haste to establish a Palestinian entity on land on which Israel has longstanding and legal claims.

The United Nations brushes aside the fact that the Palestine they crave to establish is and will remain a dysfunctional, divided, violent, undemocratic society that refuses to recognise Israel’s right to exist as the Jewish state. Both sides of the Palestinian political divide have permanent agendas to eradicate the Jewish state at some convenient future time. As proof, the charters of both the PLO and Hamas call for the eventual destruction of Israel and the murder of Jews. As further proof just listen or read the exhortations emanating out of their official statements and the official Palestinian media.

This was not addressed by the UNSC. It was not called unlawful. It was ignored, irrelevant to their sole ambition to create this monster and leave the parties to sort out the consequences.

The UNSC vote also obliterated the Oslo Accords signed on the White House lawn between Yasser Arafat and Yizhak Rabin in the presence of President Bill Clinton and witnessed by the EU and Russia.

The Oslo Accords divided the territories known as Judea & Samaria or the West Bank into three zones. Area A was put under the civil and security administration of the Palestinian Authority. Area B was given to the PA for their civil rule while the security elements were agreed to be a joint Israeli-PA project.  Area C was designated to be under complete Israel civil and security control until some future permanent peace agreement depending on the terms and conditions of such an agreement.

Currently in Area C there are almost 600,000 Jews and just under 100,000 Arabs residing there although the Palestinian Authority with the physical and financial assistant of European countries and the EU are creating facts on the ground by transferring Bedouin Arabs into Area C. These people live in buildings provided by the EU in defiance of the provisions of Area C.

According to the Oslo Accords, Area C will be negotiated in the permanent status negotiations which have not taken place because the Palestinian Authority, and certainly not Palestinian Hamas, has any inclination to sit with the Israeli leadership to negotiate mutual recognition, borders, or any other final status provisions.

The wording of new UNSC vote would have us believe that this Oslo Accord provision is null and void. Area C has been replaced and given the status of “illegally occupied Palestinian territory.” Not so.  The presumption that Israel must withdraw from all territories or that Jews will not continue to live and work on Judea & Samaria is a gross and deliberate aberration.

What was most abhorrent in the wording of the unanimously approved UNSC resolution was the removal of all Israeli claims to the most holy Jewish sites placing them at the feet of the Palestinians.

When the United Nations Security Council calls the Jewish Quarter in the Old City of Jerusalem with its synagogues, yeshivot, Jewish population and businesses, the Jewish Temple Mount and the Western Wall and all its antiquities, and the Jewish cemetery on the Mount of Olives, the Hadassah Hospital and other profoundly Jewish/Israeli institutions and heritage as “Palestinian Territory occupied since 1967, including East Jerusalem” it is a surrender that no Israeli government or any caring Jew are prepared to accept.

I doubt that many Jews in the global community would permit the United Nations to dispense so glibly with three thousand years of Jewish history.

The fact that the United States, New Zealand, the UK and France lent their hand to this infamous act is appalling.

Barry Shaw is the Senior Associate for Public Diplomacy at the Israel Institute for Strategic Studies and the author of the upcoming and timely book ‘1917. From Palestine to the Land of Israel.’