TWO-STATERS IN A MONTY PYTHON SKETCH 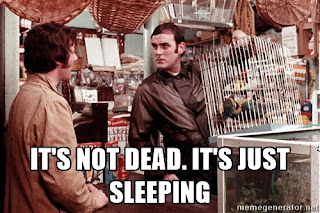 It is depressing to hear supposedly informed and influential global figures continue to tout a failed two-state theory as the only way to solve the Palestinian problem.
It has been promoted, pushed and practised by the finest diplomats since 1967.  For fifty years they have been flogging this dead bird and selling it to the public as if one day it will become a wondrous peacock.

When will they admit that this birds corpse, to paraphrase a Monty Python sketch, is deceased?

When discussing the two-state issue with stubborn diplomats I get the depressing feeling that I have become a character taking in a famous Monty Python sketch. You know the one. It’s the one with a customer, brilliantly portrayed by John Cleese, who takes an obviously dead parrot back to a pet shop in which the owner, played by Michael Palin, stubbornly denies that the bird he had recently sold to Cleese is dead.

The major flaw of the two-state remedy is not only is it a solution going nowhere. It is the stubborn refusal of an impotent diplomatic world to admit this obvious fact. Like Palin, they desperately cling to it as the only bird in the menagerie.

And so I often find myself in that diplomatic pet shop whenever I point out that this two-state parrot is dead. The diplomats I talk to always give me the Palin response that it isn’t dead. It’s just resting. They tell me that the two-state solution, when it wakes up, will have beautiful plumage to which I am forced to remind them, “Forget about the plumage. It’s stone dead!”

How many times have we heard the international diplomatic community tell us that the two-state solution is dormant? It’s no good demanding that they show us that it isn’t dead.  As in the sketch we know that waving a handful of birdseed at the dead parrot or banging on the cage door will not wake it up.

We know it is dead. They insist it is only stunned. They insist that the total lack of movement from this dead parrot derives only from Israel not giving it enough sustenance or oxygen and if we just did that the bird will quickly revive and begin to impress us with its natural beauty.

It is at this stage we point out that the only reason the two-state corpse has not dropped on the cage floor is because its feet have been nailed to the perch by the two-state promoters insistently determined to show us that it is still alive.

We have reached the point where we must forcefully point out to the global pet shop owners that this parrot really is dead, that it has finally gone to meet its maker, it is deceased, it has passed on, it no longer exists, it’s pushing up the daisies, it has run down the curtain and joined the invisible choir, it is bereft of life, it is no more, it has ceased to be, it has kicked the bucket and shuffled off its mortal coil. It is history.

And when you are pausing for breath do not be deceived when the pet shop owner tells you that he has an equally good two-state peacock in his storeroom to sell you.

It will take another fifty years of staring at this parrot before you realize, once again, that this tropical bird will not fly either.

Barry Shaw is the Senior Associate for Public Diplomacy at the Israel Institute for Strategic Studies.  He is the author of ‘BDS for IDIOTS’ and the new best-seller ‘1917. From Palestine to the Land of Israel.’  https://www.createspace.com/6830537
Posted by theviewfromisrael.com at 15:00