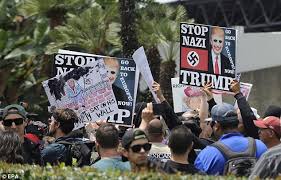 The words and frightening rhetoric heard since Trump's ascent to power is deeply troubling.

When I hear inciting remarks from Madonna that she thought about blowing up the White House, or from known senators that Trump is illegitimate, or signs that compare Trump to Hitler I recall exactly these scenes prior to the madman Yigal Alon taking the law, and a gun, into their own hands.

The result of this poisonous environment resulted in the murder of our Prime Minister. Be warned!

The organised and poisonous campaign of anarchy and hate will lead to yet another black act of violence and bloodshed that will shame America unless it gets dialed back soon. Let calm and sanity remove hysteria and bias.

A final reminder. We commemorate Holocaust Day this Friday.

The Holocaust did not start at Auschwitz. It began with words. Hateful words. Words that delegitimate. Words that kill!

Listen and be warned!