When I visited Holland in 2015 to speak to Jewish and Christian audiences and to have private meetings with pro-Israel leaders I was told how Dutch Jews were increasingly fearful about speaking out or showing their support for Israel. Their main fears derived from the threatening atmosphere being stoked up by anti-Israel protesters and BDS activists.

I was introduced to Rabbi Benjamin Jacobs, the head of the Dutch Jewish community, who has been the victim of five attacks as Jews have been targeted in proportion to the rise of BDS and other anti-Israel activism in Holland.

So it was surprising to find my talk to the Jewish audience in the Liberal Jewish Center in Amsterdam attended by what I was told were three of the leading members of the Dutch BDS. Here they were sitting in the Anne Frank Hall in the presence of the people who told me they are fearful of them.

I purposefully engaged one of them in a public dialogue. One openly admitted that the BDS cause was to achieve a One-State solution and not the achievement of a two-state peace deal. In other words, he was loyal to Omar Barghouti, the BDS founder, who has always advocated the end of the Jewish state of Israel.  This character wearing his brown shirt emblazoned with ‘BOYCOTT ISRAEL’ stickers on a background of a Palestinian flag certainly subscribes to a Palestinian state “from the river to the sea.”

In the end I wiped the floor with him in an exchange in which I deconstructed all the emotional tropes he could hurl at Israel.  I showed him, but more importantly the audience, how the insults he threw at Israel applies in spades to the Arab regimes that surround Israel and to the Palestinian themselves.

Apartheid state? Look at Jordan that has kept tens of thousands of fellow Arabs and Muslims in refugee camps, stateless, for seventy years.
Ethnic cleansing? Look at the Syrian slaughter of Palestinians and the mass deportation of Palestinians from Kuwait.
Gaza blockade?  How about Egypt’s total blockade of Gaza compared to the thousand truck that flow into the Gaza Strip from Israel daily.
Human rights? This ‘pro-Palestinian’  BDS advocate never protests the horrendous human rights abuses perpetrated against their own people by both Fatah and Hamas.

BDS hypocrisy is staggering. Their arguments may be emotionally eloquent to the uninformed but they are intellectually dumb to those who know the facts.  Why then are Jews in Holland afraid to challenge these idiots?

BDS activists show their stupidity regularly. Take, for example, the case of the BDS idiot who, after a morning spent in Dam Square trying to persuade people to boycott Israel, walked into a falafel café to satisfy his hunger. This fool wasn’t aware that he was giving his money to an Israeli-owned fast food chain!  Talk about dumb and dumber. 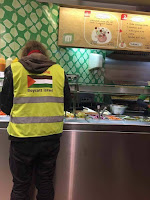 What is disturbing in Holland, and in Amsterdam is particular, is that the BDS are allowed to pitch their lies every week in Dam Square but pro-Israel activists are allowed to hold counter-events in the same square but they are unprotected.

Two brave and insistent girls, Brenda Aartsen and Sabine Sterk, who started a group called 'Time To Stand Up For Israel' recruit fellow lovers of Israel to join them in a quiet presence at the same time BDS occupies Amsterdam's main square.
They draw attention by draped themselves in large Israeli flags. They engage in pleasant conversations with tourists and visitors and display a large floor poster displaying the name of their group.

Their constant presence has driven the BDS mob to frenzy and violence.

On Sunday March 12, 2017, one hot head showed the true face of BDS. He told a girl wrapped in an Israeli flag; “You  fucking Jew Zionist! Go to your own country and demonstrate there.” The Israel supporting girl was Dutch and Christian.  When the abuser saw a man taking pictures he ran and attacked him. Others came to the cameraman’s assistance and the BDS hooligan attacked one man severely causing him head wounds while also spraying people with blue paint.

The police were not present in the square at the time of the incident. Sabine tracked the assailant while calling the police emergency number. When the attacker saw her following him he turned on her and was about to attack her but two men protected her. He spat in her face before the police arrived and arrested him. The helpers acted as witnesses.

In an earlier incident the girls received death threats from Haya el-Fatahi, a radicalized Muslim woman.  A week later this woman returned to Dam Square and was filmed smashing Sabine's camera from her hand as she filmed the assault from this Moroccan-born agitator. Her trial will take place on May 10th.

During the March riots in Rotterdam, Dutch Muslims supporting Turkey's Erdogan's insults against the government, called the Dutch government "cancer Jews."  This has been heard by BDS supporters in Dam Square Amsterdam.

The rise of the Green Party in the Dutch parliamentary elections is also worrying. They have traditionally been anti-Israel and the Green success will embolden radical anti-Israel forces within the party in the days ahead.

It appears Jewish and pro-Israel communities in Holland do have genuine cause for concern.  The complaints I hear is that they feel unprotected by the police and the authorities and are told to stand down and not to challenge the anti-Israel mob that have been allowed the free reign of Dutch democratic privileges. Court leniency make Brenda and Sabine fearful that abuse and violent behaviour by BDS hooligans will go unpunished.

However, the stubborn resistance of two Christian girls must be applauded. They are prepared to go into the square to offer an Israeli perspective in the face of lies and threats.

These two girls show the rest of us that it really is time to stand up for Israel.


He is the author of the best-selling book “BDS for IDIOTS.”