Shtetls and Ghettos to the Jewish State. Nothing has changed. 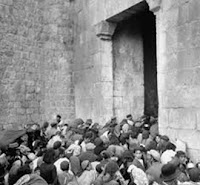 Nothing has changed in attitudes against the Jews in the last century.

From the programs of a hundred years ago to the strain inflicted on Israel today there is an eerie similarity.
Jews confined to their Russian shtetls suffered the murders and horrors of Jew haters.

Polish Jews were herded into ghettoes, ghettoes where their presence was harshly tolerated as a temporary measure by their Nazi masters.

History shows us that these shtetls and ghettoes were gradually reduced in size and denuded of their Jewish population by the ethnic cleansing of their haters.  There, Jewish exclusivity did nothing to make them feel safe. On the contrary, a sense of vulnerability and foreboding hovered in the streets and in the homes of the enclosed and entrapped population.

In a real sense, we see this being played out in the Middle East today. Muslim countries expelled their Jews, and Israel was the beneficiary. The Jewish State did not feel like a ghetto then. It welcomed its brethren with open arms. It was a positive development.  But the Arab nations that banished their Jews did not see it that way. They detested the growing Jewish presence in their region and took violent steps to do away with it. In this, they were in kinship with the Russian and German anti-Semites.

On a promise of a reduced homeland, the Jews were deprived of the vast majority of the land for the benefit of the complaining Arabs. This territory became known as Transjordan.

Then, after Arab armies failed to destroy the nascent Jewish State, Israel was persuaded to relinquish further land for peace in the name of a non-existent harmonious and peace-loving Palestinian nationhood.

Having lost five wars to eliminate the Jewish presence in the Middle East, the Arabs encouraged and promoted a Palestinian anti-Israel narrative and action campaign. The aim was shudderingly familiar – to pressure the world to force Jews to relinquish territory and property.

Despite an incessant terror campaign that left thousands of Israelis dead and more injured, the Arabs, now called Palestinians, were projected as the victims.

In the delusional spirit of goodwill, Israel signed accords with a determined enemy, withdrew from developed land in Gaza with beautiful homes, rich agricultural infrastructure, and the beginnings of a tourist industry, traumatically removing its population, only to discover they had been tricked and trapped by international forums determined to reduce the Jewish ghetto in the Middle East further into areas of indefensible lines.

Israeli objections are met with diplomatic threats, boycotts, and the threat of violence.

As with the shtetl and the ghetto, nobody can assure the Jews of Israel that any withdrawal into vulnerable and over-crowded areas will put an end to the persistent threat of a Final Solution to the Jewish Problem in the Middle East. To any Israeli Jew with grave concerns comes a glib dismissal that Jews now have a strong army, so cope with the repercussions.

The international collusion with the Arabs is little different to the collusion of British officials exactly one hundred years ago in Jerusalem, Cairo and Whitehall who, instead of carrying out both British policy and the terms of the League of Nations Mandate to establish the Jewish national homeland, deserted their responsibilities by turning their backs on the Jews they were instructed to assist and, instead, duplicitously encouraged the Arabs to protest the Jewish presence.   What is going on with the false charges of “illegal occupation” and “illegal settlements” if not this?

Today, the effort is to reduce and diminish the Land of Israel further in favor of advancing a Greater Palestine that has failed to contribute any scientific, agricultural or social advancement within its society. Instead, they continue to nurture the age-old anti-Jewish attitude and the perpetuation of anti-Jewish hatred and violence.  A Greater Palestine is divided within itself and united only in their determination to inflict further ethnic cleansing on the Jews of Israel.

From the shtetl to the ghetto to the Jewish State, little has changed in attitudes against the Jews in the last century.

Barry Shaw is the author of the best-selling book ‘1917. From Palestine to the Land of Israel.’   He is also the Senior Associate for Public Diplomacy at the Israel Institute for Strategic Studies.