JVP. The Epitome of Jewish Self-Hate.


The horror felt in Israel over a group calling themselves Jewish Voice for Peace hosting a convicted Palestinian terrorist guilty of murdering Jews is palpable.

No words can adequately express the shock in the Jewish state to learn that an American Jewish group went out of their way to invite an unrepentant killer of Jews as their special guest.

An estimated thousand people gathered at the Hyatt Regency in Chicago on March 31, 2017, to witness a smiling JVP director, Rebecca Vilkomerson, introduce Rasmea Odeh to the adoring crowd. 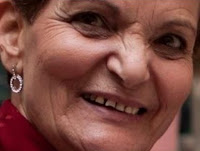 Odeh is a member of the Popular Front for the Liberation of Palestine, a notorious Palestinian terror group that has killed hundreds of Israelis in decades of fatal terror incidents. The ideology of this terrorist organization is to kill as many Jews as it takes until the Jewish homeland no longer exists.

In 1969, Odeh planted bombs in Jerusalem in a deliberate attempt to kill Jewish civilians. In an explosion at a crowded supermarket, two students were killed and nine others injured. Rasmea Odeh was sentenced to life imprisonment for her role in these attacks but was released by Israel in an exchange for the release of one Israeli soldier held by her PFLP terrorists in Lebanon.

Odeh entered the United States from Jordan but lied about her murderous terrorist past on her immigration forms as she applied to become an American citizen.  To cover up for her lie she accused Jennifer Williams, her Detroit immigration officer, of lying by misinforming her of the meaning of the immigration questions relating to a person’s criminal background.

Odeh was sentenced to imprisonment for a year and a half and then to be deported by a Detroit court for hiding her terrorist past. The incursion of terrorists into America is currently a hot topic in America. Odeh is one example of a convicted terrorist slipping through the cracks. She was freed on bail pending an appeal but on March 23 she accepted a plea bargain in which she will serve no jail time, be stripped of the American citizenship, and be deported.

Odeh has spent her life lying about herself and Israel to the extent that she claims she was tortured while in prison without substantiating her claims which were rebutted by her co-conspirators, one of whom named her as the perpetrator of the deadly supermarket bombing.

This then is the person that a Jewish organization honored. A terrorist killer of Jews and a serial liar, as their special guest in Chicago.

JVP is an avid pro-BDS group. BDS, like Odeh and the PFLP, shamelessly campaigns for a world without the Jewish State.
The fact that this Jewish organization has made common cause with Jew-killers and Israel haters is deeply disturbing.

What inordinate and fevered minds do members of this Jewish group have by lauding killers of their co-religionists? Even the dreadful kappos of the Holocaust did not honor the Jew killers of that sad time.
What hysteria demons possess their Jewish souls to the degree that they saluted this Jew-killing “heroine” with a standing ovation?

What obscene sense of justice was displayed by Jews who traveled distances to hear the odious Odeh, yet omitted any thought or homage to Leon Kaner of Netanya and Edward Joffe of Tel Aviv, the two Jewish students that were blown up by Odeh’s bomb.  May their names be blessed, and the name of Odeh and all those who fawn over her be cursed. 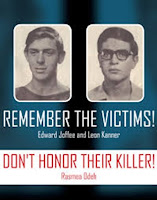 I am sorry but further words fail me. My mind is confronted by the depravity of thought perpetrated by this offensive Jewish group and its supporters.

They honored a person whose whole raison d’etre is to achieve the Final Solution to the Jewish Problem in Palestine.

Barry Shaw is the Senior Associate for Public Diplomacy at the Israel Institute for Strategic Studies.  He was also the co-founder of the Netanya Terror Victims Organisation and the author of ‘Fighting Hamas, BDS and Anti-Semitism.’