The hypocrisy of those who don’t believe or practice what they preach.

Richard Branson called out Trump for pulling America out of the Paris Accord. He said “fossil fuels are dangerous” yet he is flying Virgin planes all over the planet, and experimenting with space flights. He also owns a Dassault Falcon private jet that burns more fuel in a single trip from Hawaii to his American home than you will burn in a lifetime of driving to the beach!

Elon Musk was also critic of Trump as he flies his huge Gulfstream G650 private plane across the globe.

Bill Gates is “deeply troubled” by Trump’s decision as he flies his huge $52 million Global Express super plane. Think about his carbon footprint all over the skies.

Leonardo de Caprio said “Trump threatened the livability of our planet” but he flew by private jet 4000 miles from Cannes,  France, to New York to accept a Global Climate Award – and then flew back to Cannes again on this private plane, saying Trump’s decision was a “historic mistake.” Consider his historic hypocrisy as he luxuriates on his private flights, leaving a trail of carbon emission behind him that is greater than you will ever leave.

How about Hillary Clinton? Last year, she hired a private plane to fly 20 miles to a fund raising event. She also refused Michelle Obama’s offer to share a private plane to Betty Ford’s funeral. Instead, Clinton decided to double up on carbon emissions by hiring a separate private jet to fly to the same event.

He said that Trump’s decision to renegotiate the Paris Accord “could crush future generations.” Yet Obama took a Marine helicopter to fly the short distance to a government-owned 747 super plane which flew him and his family across the country to Palm Springs, California, drove in a motorcade to an 11,000 sq. foot mansion for a weekend burning up electricity and air conditioning emissions, before flying in Richard Branson’s private plane across America to the Caribbean. 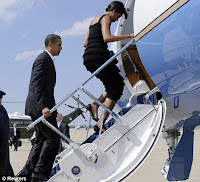 From there he took a private boat to Branson’s private island for a few days of jet skiing and fun. Then he took a private jet to Tahiti for  more R&R before flying, again in a private jet, of course, across the world to Milan where a 14 vehicle motorcade was waiting to whisk him to, guess what - a Global Warming Conference!!

Obama is responsible for more global warming, along with his allies, than you are in a lifetime.

So, when they preach, you now know it’s simply hot air.