Why Weiwei is wrong. His Palestinian hero is a Hamas terrorist..

Ai Weiwei, is lauded globally for his work as a contemporary artist. He is also a political activist.
Weiwei has visited Israel a couple of time. He came in 2016 to film his documentary ‘Human Flow. He was given permission to visit Gaza as part of his project.
Resisting boycott calls, he returned to Israel in 2017 for an exhibition of his work in the Israel Museum in Jerusalem.

But recently, he took to social media to publicize the death of Yasser Abdullah Murtaja, killed during the violent Hamas provocations at Gaza’s border with Israel.

Apparently Weiwei met with Murtaja during the shooting of his documentary. Weiwei posted a picture of Murtaja on his Instagram feed, saying that he was a photojournalist who was reporting on the mass protests and that he was shot by the Israeli military during the demonstrations and died in hospital on April 6. He worked as a cameraman for Human Flow in Gaza in 2016. He added the words, “So sick!”  He also retweeted a post from a blogger who wrote, “They…terrorize the Palestinians. Gaza is an open air concentration camp.”

Murtaja was indeed a photojournalist. He was also a registered Hamas fighter (terrorist). Photographs have been released which show Murtaja dressed in Hamas military garb and carrying a Kalashnikov rifle. In another, he is pledging his devotion to Hamas and announcing his willingness to die for their cause.

The Meir Amit Intelligence and Terrorism Information Center in Israel have accounted for the identities of those killed in the recent Hamas provocations and reported that fully 80% were affiliated with a Palestinian terror group.
Murtaja specifically belonged to the Sejaiya Battalion of the Izz a-Din al-Qassam Brigade, branch of Hamas. 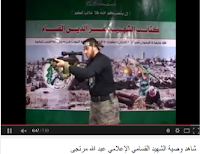 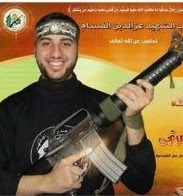 To Weiwei, Murtaja may be a talented human rights protester and photojournalist.  To Israelis, he is a trained Hamas terrorist.
Weiwei should not use his art and his fame to pervert the truth and whitewash the haters and killers of Jews.
Posted by theviewfromisrael.com at 20:39