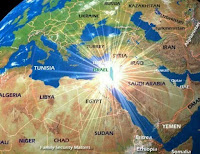 Israel has taken wrongful abuse by much emotional misinterpretation over the recently passed Nation-State law.
It has been called everything from "racist," "apartheid," to undemocratic.
Basically, it a continuum of every racial epithet that has been hurled at the Jewish state for years, wrongly.
Israel, the nation state of the Jewish people, with an overwhelming majority of Jewish citizens, has always been, since its inception, sensitive to the needs of its minorities (plural) ensuring and protecting their civil and religious rights and freedoms while allowing them access and promotion in all the chambers of power and influence, including the Knesset, city halls, even the highest positions of the Supreme Court.
These Jewish principles and values did not arise with the establishment of Israel. They have been there for thousands of years at the heart of Jewish thought.
This Shabbat's reading of the Torah ( Shoftim) talks about judges and kings and how they should govern in fairness and justice.
It is written that Jewish kings should not acquire great wealth and riches, "so that his heart will not be haughty over his brothers."
The king, it is decreed in the Holy book, should not be arrogant despite his position.
As it is written in Psalms, "For he will save a needy one who cries out, and a poor one who has no helper. He will have pity on the poor and needy, and he will save the souls of the needy. From the blows and from robbery he will redeem their soul, and their blood will be dear in their eyes."
As we read this passage from our Torah we witness how our Israeli soldiers, doctors, and nurses, receive the wounded and sick of Syria an enemy nation, how our volunteers reach out across the globe to rescue and comfort those suffering tragedies of earthquakes and other natural disasters, and our agricultural and medical volunteers who give of their time and talent in the poorest parts of Africa and Asia.
In all this, and more, we can see our humanitarian Israeli Jews, in their thousands, acting like the just and humble biblical kings of old applying, in practical terms, the call for Tikum Olam - Repair the World.
Each of them, in their humble and just deeds, make a mockery of the false slanders and accusations hurled at the Jewish state by malevolent haters.
Let those who judge us wrongly, judge themselves.
Please share.
Barry Shaw, Senior Associate for Public Diplomacy. Israel Institute for Strategic Studies.

Author of "Fighting Hamas, BDS, and Anti-Semitism."
Posted by theviewfromisrael.com at 11:43