The Irish anti-Israel bill is a fraudulent piece of anti-Semitic legislation. 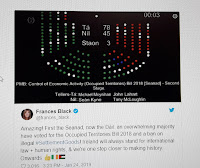