Israel is the next target for “The Squad.” How rapidly has America fallen.

The new radical force in American politics has come to be represented by what is called “The Squad”, four new and radical Democratic congresswomen who have used their sex and their ethnicity as a battering ram to force themselves and their radical policies at the center of their party. Anyone who stands in their way is condemned as a racist, even members of their own party including former Vice President, Joe Biden, and House Speaker, Nancy Pelosi.
Pelosi said, in a conversation with New York Times columnist, Maureen Dowd, after the four women voted against a Democratic bill for border funding, “These people have they public whatever. There are four of them, and that’s how many votes they got.”
Dowd referred to Rashida Tlaib, Ilhan Omar, Alexandria Ocasio-Cortez (AOC) and Ayanna Pressley as “the Squad.”  Pelosi flippantly under-estimated them.
Fox News host, Laura Ingraham, identified them as “the four horsewomen of the apocalypse” as early as last November.
They spread hate and division, even anti-Semitism and disdain for America but, in Pressley’s words, they think they are “creating a more equitable world.” This is the corruption of thought of these new policy makers who think they are doing justice as they express hateful, racist and divisive remarks.
Where did these people come from, and are there more?
They are the product of the fraud factory that is the American campus, a breeding ground where radical professors and lecturers are pumping out indoctrinated activists off a conveyor belt of ideas to become the next generation opinion, influence and policy makers.
The academic battleground of ideas has been lost to the pragmatic, truly liberal and certainly the conservative educators. Academia has become dogma.
Faculties for formative ideas have been hijacked by the thought-control manipulators producing the AOCs, Omars, Tlaibs and Pressleys. There are many more following them out of the incubator of incitement and into positions of power.
They have found easy paths to power, whether it be in the social and print media or in politics. Both compliment and collaborate together in the one cause.
Politically, they have found the Democratic Party to be easy prey, particularly after an embarrassing defeat in the 2016 Presidential elections. The disillusioned party, bereft of direction or cause, was wide open to radical forces.
The freshmen come trained, nurtured and strategized by crafty spin-masters and operators with nasty ideas to, in Obama’s words, “radically change America.” 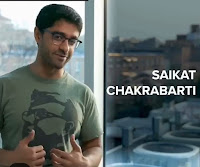 AOC’s chief of staff, Saikat Chakrabarti, looks like an Indian Harry Potter, but he is the American version of Seamus Milne, the not-so shadowy Strategy and Communication Director who pulls the strings of Britain’s Labour Party leader, Jeremy Corbyn, and who formulates his policies and campaigns. It is not by coincidence that both left-wing parties have a growing anti-Semitism and anti-Israel problem.
What motivates Chakarabarti can be found on the T-shirt he used to wear as he operated AOC’s successful run for Congress. It depicted the face of Subhas Chandra Bose, an Indian who once dreamed of grabbing power in India. It was during the Second World War and Bose went to Nazi Germany to gain their support. Bose’s ideological statements included, “Freedom is not given, it must be taken,” and “No real change in history can be achieved in discussion.” On other words, power must be taken. 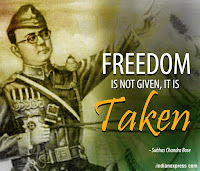 Bose died before he could execute his power grab, but this is the political philosophy and motivation of the key strategist of the new Democrats, a disciple of Bose.
One would think that this is the complete antithesis of American values, but It is the next stage of Obama’s stated aim to “fundamentally change America.”
Supporting Chakarabarti is Cenk Uygar, a Turkish-American, the creator of The Young Turks which, among other things, broadcasts a radical “progressive” agenda and active plan for America. Not “The Young Americans.” It’s The Young Turks for Uygar.
Uygar is also the founder of the Justice Democrats which calls itself a political action committee to progress their radical policies.  Rashida Tlaib and Ilhan Omar have said they are “extensions” of this movement.
Behind these dynamic operators is money.  Uygar has an estimate five million dollars, but George Soros is one of the prime financiers of the radical agenda within the Democratic Party. According to Media Research Center, Soros’s The Media Consortium reaches nearly three hundred million people a month. Soros funds nearly every major left-wing media source in the United States. It is the propaganda arm of the political action strategists.
This new movement is not confined to the Democratic Party.

Just as Corbyn receives active support from pro-Palestinian, Hate-Israel, groups in the UK that includes the Islamic Human Rights Council, so in America the support includes the Council of American-Islamic Relations (CAIR) who are actively emboldening their new political recruits. Leaders of CAIR can be seen marching through the halls of power in Congress. Ilhan Omar was the main attraction at fund-raising events for Islamic Relief, an organization with deep ties to groups that advocate terrorism against Israel, and for CAIR, a group that was named as a co-conspirator in a major Hamas terror-funding incident. Can you imagine a sign that reads 'Building Jewish Power for 2020'?

Rashida Tlaib has personal friends that include Ramea Odeh, a convicted terrorist murderer of two Israeli students, Mohammad Ali who stabbed three Israelis, and other rabidly anti-Semitic Israel haters.
Tlaib wraps herself around a Palestinian flag when elected to Congress and then accuses American Jews of having "dual loyalty."
This Red-Green alliance between hard left politics and political Islam, the merging of radical ideas, the organizational power and money, the marshalling of grassroots activism including getting voters to the polling booths, is where the radical left meets political Islamists as they march together to gain power. Theologically, the Islamists will never become members of secular political parties in Britain and America, but they will place their candidates into positions of political power, vote for them and ensure they do their bidding once elected.
This new political force has rapidly gained ground in the United States where the Democratic establishment has been caught off guard and unable to present a coherent opposition to this powerful and organized momentum. Pelosi made the fatal mistake of appeasing them, only to discover when she objected to their policies she was accused by them of being a racist. Now she is unable to wrest power back from them.
Joan Ryan, who resigned as a Labour Member of Parliament over her party’s rampant anti-Semitism, delivered a stark warning to the AIPAC Conference last May on how quickly things can change. She told America, “I would never have believed just three years ago that the party which backed a Jewish homeland would sink so low so fast.”
This is now happening in America to a Democratic Party, a party that was unable to affirmatively condemn the anti-Semitic and anti-Israel rhetoric of Omar and Tlaib and is now paying the price for their negligence.
What is next for “The Squad”?
They intend to lead a delegation to Israel. Actually, they intend to lead it to “Palestine.” They are not coming to advance peace or cooperation. They will be doing it to advance hate and confrontation.
This will become a diplomatic embarrassment for the United States, both for the current Administration and for a Democratic Party that will be severely challenged trying to prevent such a visit. If American politicians fail to stop this visit, the Israeli government will be left with the diplomatic headache of whether to allow or prevent a visitation of hostile US Congressional representatives and their guests coming to advance their Palestinian agenda.
It will be an official Gaza Flotilla without the boats. And what if they are accompanied by Linda Sarsour?
The visit will be made all the more embarrassing when it is led by Ilhan Omar who sits on the US Foreign Affairs Committee and Rashida Tlaib who draped herself not in an American flag but in a Palestinian flag when elected to Congress.
How rapidly America has fallen.

Barry Shaw is the International Public Diplomacy Director at the Israel Institute for Strategic Studies. He is the author of ‘Fighting Hamas, BDS and Anti-Semitism.’