The anti-Israel, Palestine-supporting, LGBT community should reconsider their position.

According to a survey conducted by the Arab Barometer research network during LGBT Pride month in June 2019 for BBC Arabic News revealed shocking facts about the depth of homophobia in the Arab world.
Their wide survey included the Middle East and North Africa.
The BBC reported that "acceptance of homosexuality varies but is low or extremely low across the region."
Algeria scored the highest but at a low 21% tolerance to same-sex relations. They were followed by Morocco with 21%.
But the greatest degree of intolerance of all the groupings to gay and lesbian relationships was found among the Palestinians whose rights have been championed by many in the Western LGBT community.
The survey found that only 5% of Palestinians tolerated same-sex relations 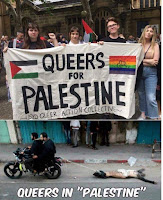 making them the most intolerant group across the region against the gay community.
Jordan scored almost as badly with only a 7% degree of tolerance.
The most surprising statistic was the low 6% found in Lebanon, a country that is considered as being more socially liberal. Apparently this is not so and the low mark could be an indicator of the rising Islamic influence of Hezbollah in Lebanese society.
Lack of access meant that the survey did not include Iran where at least 6,000 gays and lesbians have been executed since the Islamic Revolution.
At a press conference with the German Foreign Minister, Heiko Mass in June, the Iranian Foreign Minister, Mohammad Javad Zarif, has the gall to say publicly that his country executes gays because of "moral principles."
But so do the Palestinians.

In this survey only Palestinians living in the West Bank were included in the research. Had the survey included the Gaza Strip the figure of 5% would have been even lower.
Hamas enforces a deadly form of homophobia in the Strip. Gays are gruesomely executed in Gaza. 34 year-old, Mahmoud Ishtiwi, was shot three times in the chest on charges of engaging in gay sex. The fact that he was a Hamas commander who hated Jews and Israel didn't save him. Others have been thrown off rooftops.
One thing is common knowledge in Palestinian society. If you are gay in Gaza you either stay in the closet or escape to Tel Aviv.
Richard Grenell, the gay US Ambassador to Germany, is leading the campaign to end the criminalization and persecution of LGBT members in Middle Eastern societies.

The Western LGBT community could take a courageous step by reassessing their position regarding the Palestinian attitude against them and become much more affirmatively active in highlighting the predicament of gays in Palestinian society by promoting the tolerance and freedom afforded their members within Israeli society as an example to the rest of the region.

Barry Shaw is the International Public Diplomacy Director at the Israel Institute for Strategic Studies.
Posted by theviewfromisrael.com at 09:33