The biased hypocrisy of the #MeToo Movement was blatantly obvious when Tara Reade came forward to complain about being sexually assaulted by Democratic Presidential nominee, Joe Biden.
Result? Total silence. 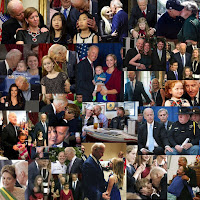 The assault took place in his Senate office in 1993. Reade put her complaint on record at the Senate. Her complaint was ignored.  She also complained about Biden’s assault to friends and family.
In March of last year, Reade told the Union, a Nevada County, California, paper, that Biden had a habit of touching her inappropriately when she worked for him between 1992 and 1993. “He used to put his hand on my shoulder and run his finger up my neck,” she said. “I would just kind of freeze and wait for him to stop doing that.” According to the Union, a “confidante” of Reade’s confirmed the account. Reade also added that she was fired over her refusal to serve drinks at an event, after learning Biden allegedly wanted her to do so because he liked her legs. She said that many of the senior employees in Biden’s office “protected” their boss.
Last month, she expanded on the allegation on the Katie Halper Show, telling the filmmaker that Biden assaulted her when she was dropping off a gym bag with him in spring 1993. “I handed him the thing and he greeted me,” Reade said. “There was no like exchange really. He just had me up against the wall.”