Is Joe Biden a moral person, or a hypocrite and a bully?

Why don’t the Democrats practice what they preach?
If they did, they would be worthy of respect. The fact that they don’t leaves them open to contempt and suspicion. 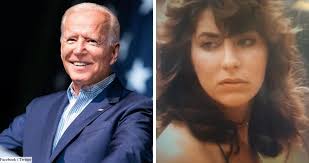 That latest evidence of their hypocrisy centers around their duplicity in the cover up of recent allegations of sexual assault against their Presidential candidate and former Vice President, Joe Biden, by a female staffer.
Biden, backed by his supporters in his party and the supporting media, dodged the clear case of Biden using US governmental bribery to have the chief Ukrainian prosecutor fired for opening an investigation into his son’s involvement with the corrupt Barisma Holdings energy company.

Biden has also threatened to “beat the hell out of Trump.” He told a factory worker in Michigan that he would take him outside and fight him. Even when addressing domestic violence, he said “we’ve got to keep lunching at it and punching at it.”


Hardly the right expression to use in solving violence.
Now an allegation has emerged of a sexual assault by Joe Biden on Tara Reade in the Senate offices back in 1993.
Reade worked for Biden over an eight-month period from 1992-1993. According to her complaint, she was asked to deliver him a gym bag. She found him in the corridor and there he sexually assaulted her. The assault included, according to Reade, having Biden enter her vagina with his finger. Her description is explicit in its detail.
Tara Reade said she immediately lodged a complaint at the Senate office but this was not acted on. She went home and complained to her mother, her brother, and a friend who all corroborate her story.  In April 2019, she contacted a local paper with the story of her incident. The facts that her assailant is now, potentially, the next President of the United States and this troubles Miss Reade.
“I think it is shocking that this much time has passed and that he is an actual nominee for president, and they are not asking the question. That tells me there may be a political agenda behind it, and that is gross. I am a survivor and I would like the question asked.”
What’s disturbing is the radical difference in the Democrats attitude against Biden’s accuser and their approach to the accuser of Judge Brett Kavanagh.  Where was the #MeToo Movement then, and where are they today?
Judge Kavanagh was President Trump’s pick for a vacant seat on the Supreme Court. The Democrats and their lawyers cajoled Christine Blassey Ford to come forward as they mounted a highly publicized Senate Hearing. They attempted to destroy the judge and his family with a full-on assault on his reputation over allegations going back to a night in 1982 when Kavanagh was a teenager.
Despite her protestations, Ford could not produce any timeline evidence or witness to back up her story.
Compare that to the explicit evidence offered by Reade as to the period of her employment and the exact date, time and location of the assault. Records of her complaint have not, so far, been forthcoming from the Senate office. But one significant factor came to light when a local reporter dug up a video recording from the Larry King Show dated precisely in the 1993 timeline after Tara had told her mother about the incident. King received, live on air, a call from a woman claiming to be the mother of a Senate staffer who wanted to know why the Senate does nothing when young female staffers complaint about sexual harassment in the workplace.
This adds further corroboration to Reade’s story. And yet, the Democrats still refuse open an investigation.
“I guess my question is, if this was Donald Trump, would they treat it the same way?” Tara Reade pointedly asked.
The answer has to be an unequivocal no.
“If this were Brett Kavanagh, did they treat it the same? In other words, its politics and a political agenda playing a role in objective reporting and asking questions.”
Where is the #MeToo Movement when you need them most? The answer is equally simple. Hiding out of sight.  #MeToo is a hypocritical Democratic movement.
A former advisor to Hillary Clinton, Peter Daou, had the moral courage to tell Biden to drop out of the campaign as this shadow hangs over his head.
Daou tweeted, “New information had emerged supporting Tara Reade’s account of being sexually assaulted by Joe Biden. Credible rape accusations are disqualifying, or we have NO moral standards.  This is an ethical position AND the smart strategy to beat Trump. We lose all moral authority if we embrace ‘the lesser of two accused rapists.’”
He concluded, “Principles matter. We can beat Trump and protect our values.”
The problem is the Democrats won’t do this, sadly proving they have no moral values.
Further proof of this has been the silence of Bernie Sanders, Biden’s final rival in his bid for presidency.  Putting himself forward as an independent-minded candidate, Sanders has been missing over the allegations. As former Sanders senior staffer, Tezlyn Figaro, reminded us, “Sanders signed in to the Violence Against Women crime bill so he needs to step up. Tara is a woman and she is alleging violence against her.”
More tellingly is what the accused, Joe Biden, told reporters of the Washington Post in September 2018, about the Kavanagh allegations.
“For a woman to come forward in the glaring light of focus, nationally, you’ve got to start off with the presumption that at least the essence of what she’s talking about is real, whether or not she forgets facts, whether or not it’s been made worse or better over time.”
Joe Biden. If you want to be considered as a moral and forthright President step forward, give the woman the presumption that what she is talking about is real, and defend yourself like a man, a moral man.
If not, the Democrats have a hypocrite and a coward running for president.
Barry Shaw. IISS.