Biden, Israel, the Left and the Middle East.

What the left in the United States and Europe choke on is the fact that Israel is demonstrably a force for good, progress, prosperity and stability in the Middle East and a wider world.

This fact goes against their faded narrative; a narrative they are loath to surrender.

Another concept that has left them trailing in the diplomatic wilderness is the thought that the Palestinian issue is central to Israel’s acceptance in the region. It may be a central prop of leftist academic thinking and dated European diplomacy, but it has diminished credibility in the region where much of the Arab world is fed up with Palestinian obstinacy and violence and have reached out to the Jewish state for normalcy and progress. 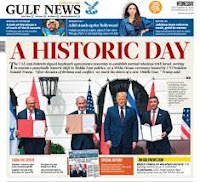 We see this as Arab states sign normalization agreements with Israel and an embracement of new trade, science, research, tourism, technology, medical, even shared intelligence and national security agreements, being signed daily.

The Palestinians, the ones who need normalcy and progress more than most, are stuck in 1967 Khartoum mode even as the emerging moderate Arab world, both Sunni and Shia, are embracing Abraham Accords 2020.

Now we hear rumors that the Biden Administration, in rejection of everything positive achieved by President Trump, is looking backward for an alternative route in their foreign policy.

There can be no progress in walking backward.

The situation with Iran will not improve by Biden going back to his old appeasement strategy with the Mad Mullahs of Tehran. It didn’t work the first time. It won’t work now.

If one thing came out of the change of heart by Arab leaders toward Israel was a shared reality of the advancing danger of the Islamic Republic of Iran.  One thing is known by Israel and our neighbors. An American smile will not deter the messianic determination of the Iranian regime to dominate the Middle East, and later the West.

The radical Israel haters are already banging on Biden-Harris’s door in their determination to put the Palestinian issue front and center.

While researching and writing about the rising anti-Semitism within Britain's Labour Party, with the inevitable anti-Israel campaigning, I predicted that this stain of anti-Semitism will be increasingly seen in America. It has not only arrived in Congress, it will be represented within the White House by Reema Dodin, a senior legislative affairs staff member who supports Palestinian suicide bombers.

Talking about the Israeli-Palestinian conflict at Berkeley she said that "Suicide bombers were the last resort" for the Palestinians. One would have thought that compromise and a desire for a peaceful statehood would be the first and last resort, not suicide bombers and rockets.

The old anti-Israel slanders will be wheeled out, slanders that overlook the rabid hatred, violence, and utter failure to accept the presence of Israel, all originate and are perpetuated on the divided Palestinian side.

Divided by the two warring factions that have been at each others throats since before 1967. These factions are not Israel and the Palestinian terrorists, although that fire has been burning for far too long. The real divide that has hampered every solution has been between the PLO-PLFP Palestinian Authority based in Ramallah, and Hamas-Palestinian Islamic Jihad faction based in Gaza.

If there were an election today, Hamas would win. This is why Mahmoud Abbas and the Palestinian Authority have not held a national election since 2007. They know they would lose. And yet, the peacemakers would have Israel surrender to an entity, like Iran, that will never accept a Jewish state in the region.

It is obvious to the simplest mind that no progress to peace is possible until there is one moderate partner to speak on behalf if a united people that is prepared to recognise Israel as a legitimate nation.

The reason there has been no progress for over fifty years is because so-called peace advocates have been delusional dreaming about a distant oasis called 1967 peace, totally unaware that the camel they have been trying to drag through the burning Middle East sand has been dead ever since Yasser Arafat spat on the signed Oslo Accords and continued his war against the Jews from his Mukata headquarters in Ramallah.

No wonder Israel dismisses their anti-Israel resolutions and demands to surrender strategic territory, territory that it has historic and legal rights to possess, to an implacable enemy.

These are the issues that a future Biden Administration will be in conflict with the facts as an increasing number of Arab states turn their backs on the Palestinians in favor of creative new agreements with Israel.

Barry Shaw is the International Public Diplomacy Director at the Israel Institute for Strategic Studies. He is the author of the best-selling book, ‘1917. From Palestine to the Land of Israel,’ available at Amazon in paperback and Kindle.