An Afghan Withdrawal. A Biden Debacle. 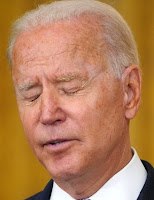 Biden is about to follow Ford and Carter into the US Hall of Shame.

Within days of Biden ordering a US troop withdrawal from Afghanistan, the Afghan President resigned and handed power to the Taliban.

After extracting US forces from Afghanistan, leaving behind a treasure trove of military hardware as an expensive parting gift for the Taliban terrorists as they blow down the US House of Cards Afghan policy known as "nation building," the weak US President just rushed 4,000 troops back to Kabul to extract personnel from the US Embassy before the Afghan capital falls to the Taliban.

Gerald Ford was embarrassed out of office by the shameful newsreel of embassy personnel clambering aboard a helicopter, rotors whirling, perched perilously on the rooftop of the Saigon US Embassy, while US troops were preventing desperate Vietnamese from fleeing their Communist conquerors.

Jimmy Carter left the White House, shamed by the vision of US embassy staff being marched blindfolded out the Kabul embassy, hands in the air in supine surrender to the goons of the Islamic regime led by a bully called Ahmadinejad who became idolized by leftwing students when he was allowed into America to attend a US conference as the triumphant Iranian president. In the indoctrination center of non-American education, he received the adulation of brainwashed American students.

He has failed in everything he has touched in his brief seven months in office. Here is a short list of his utter fiascos.

The biggest Covid super-spreader event since the 2020 mass rioting by thousands of unmasked "peaceful protesters." Namely, the invasion of over a million unverified, undocumented, illegal, migrants with thousands of untreated Covid positive people infecting their way throughout America.

The closing of the Keystone pipeline and the subsequent shortage of gas and skyrocketing prices at the pumps led Biden to beg OPEC to increase production to help him head off a crisis caused by him at home.

The rage of parents against racist hatred being taught to their kids in public schools.

The frightening levels of crime and homicides raging through cities and states as a direct result of Democrat mayors and governors following the Biden Democrat doctrine of "defunding the police."

In foreign affairs, after the embarrassing lecturing by a Chinese delegation at their Alaska meeting with Anthony Blinken, Biden rewarded Putin by lifting sanctions on the Russian pipeline to Europe immediately after Russian hackers had closed down the Colonial pipeline.

Now the biggest debacle of all.

Just over a month ago, Biden promised the Taliban would not take over Afghanistan as he announced his troop withdrawal from that country.

It is clear that Biden, his Secretary of State, his military, security, intelligence chiefs, all got caught with their pants down.

Despite their collective experience they failed miserably to estimate the capabilities of the Taliban.

It was shameful to hear the President of the United States beg the Taliban to spare the US Embassy until he had time to send in the removers to evacuate his personnel before it is seized by a bunch of uneducated sheep-herders who are on their way to a victory over the most powerful nation on earth.

This, just hours after he said at a press briefing, "The Taliban is not remotely like the Vietnamese army. They are not comparable."

What Biden didn't say was that the Afghan army armed, equipped, trained and financed with billions of dollars for twenty years was unable to control the Taliban who have just swept unchallenged through Afghanistan, driving American military Humvees armed with American machine guns and drones in the direction of the US Embassy in Kabul. 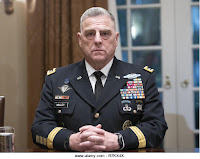 The Afghan army was trained and supervised by General Mark Milley, the US Commander who insisted before Congress a month ago that he is fine with military officers and soldiers being indoctrinated with the divisive racist critical race theory which will leave brothers in arms looking suspiciously at each other, questioning the moral strength of their country as they go into battle against lethal enemies.

This is what Milley said of the Afghan security forces a few weeks ago.

"The Afghan security forces have the capacity to sufficiently fight and defend their country. I want to emphasize, repeatedly, a negative outcome, a Taliban military take-over, is not a foregone conclusion."

He was crushingly wrong. If this is the example of your top military commander, America, you are in seriously deep trouble.

Milley never saw it coming. He was too busy indoctrinating his officer corps in BLM ideology while failing to see the corrupt misuse of the $130B that the United States gave the Afghan regime to pay ghost soldiers. These are the non-existing soldiers whose money was pocketed by lying Afghan warlords who fiddled the uninspected books.

The US Embassy in Kabul reported that the Taliban were executing captured Afghan troops in large numbers as they raced to conquer the country. We won’t list here what they are doing to the women. Where are the top Democrat women who plied millions of dollars of US taxpayer’s money into gender equality in Afghanistan. Where are they now when Afghan women need them most? The military term is missing in action. They care less for them than they do for the Covid carriers coming over their southern border.

This is the Taliban, now stronger than ever. And they are about to be joined by Al-Qaeda, ISIS, and Hezbollah. Then watch what comes out of Afghanistan.

By walking away, Biden has opened the door to the next 9/11.

Robert Gates once said perceptively in 2014 of Biden, "He has been wrong on nearly every major foreign policy and national security issue over the past four decades.”

Biden is proving that Gates was right every time he touches a serious issue.

He will surely follow Ford and Carter in the US Presidential Hall of Shame.