ISIS IS STILL ALIVE AND KILLING. 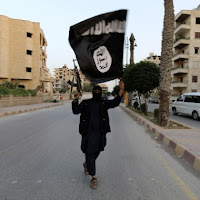 Too many people assume that ISIS has been defeated and no longer pose any threat. This is incorrect.

ISIS is still alive and killing. It has been busy attempting to gain territority by fighting local battles as they try to establish a base from which to export their terror. Here are a few recent examples of their activities listed in the Meir Amit Intelligence & Terrorism Informative Center files;

AFGHANISTAN. ISIS in Afghanistan's Khorasan Province increased its activity against the Taliban in the last month. They attacked Pakistani security forces on the eastern side of the border.

On October 3, 2021, a suicide bomber detonated his explosive belt among senior Taliban operatives taking part in a mourning ceremony at a mosque in Kabul.

SYRIA. ISIS’s activity focused on the Syrian Desert region, mainly against the Syrian army and the forces supporting it. Russian Air Force planes repeatedly attacked ISIS targets in the area. ISIS claimed responsibility for damage to the electricity grid in Damascus, causing prolonged power outages in the city.

IRAQ. ISIS’s activity continued against the Iraqi security forces and the forces supporting them mainly in the Diyala Province. ISIS also released a video calling on its operatives to continue to carry out terrorist attacks against the Iraqi authorities.

EGYPT is having success in fighting against ISIS in the Sinai Peninsular. The head of ISIS’s Sharia activity in the Sinai Peninsula and his family turned themselves in to the tribal militias in Sinai, which support the Egyptian army. This is the most senior official in ISIS’s Sinai Province who has surrendered to the Egyptian authorities. At the same time, ISIS continued its activity against the Egyptian security forces and the forces supporting them, albeit on a small scale.

AFRICA. ISIS’s West Africa and Central Africa provinces continued their intensive activity against the security forces and local Christian residents, mainly in Nigeria and the Congo. French President Emmanuel Macron has confirmed that ISIS’s leader in the Sahara was killed by French forces.

INDIA. India’s National Investigation Agency (NIA) has released a report indicating that ISIS has recently been attempting to recruit operatives in India. According to the report, 37 terrorist attacks in India have been thwarted, the last of which was in June 2021.

MOROCCO. Security forces in Morocco arrested three ISIS-affiliated operatives in Al-Rashidia, in the southeast of the country in September.

GERMANY. Acting on intelligence, police in the North Rhine-Westphalia district in western Germany foiled an attack on a synagogue in the city of Hagen that was planned to take place during Yom Kippur. Local police arrested 4 suspects involved in the planning, including a 16-year-old boy.  This was an ISIS-inspired terror attack.

Email ThisBlogThis!Share to TwitterShare to FacebookShare to Pinterest
Location: Israel