Insanity reigns in the UN mad-house. 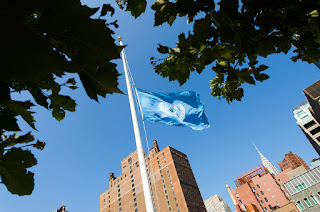 It may have escaped your notice but the world went completely insane in the last week of November.
In the wake of the Paris Islamic outrages that left over 130 killed and more than 300 badly injured, after the carnage in a Mali hotel, following the downing of Russian passenger and fighter planes over Sinai and Syria, and the never-ending mayhem in the Middle East with its consequential million plus refugees desperately trying to find shelter in a Europe and America that are locking their doors, the United Nations continued its blind hatred of Israel by passing another SIX resolutions condemning the Jewish state for all sort of alleged misdemeanors. No other country was sanctioned, only Israel.

The depravity of their anti-Israel decision-making was encapsulated in one resolution that “Determines once more that the continued occupation of the Syrian Golan and its de facto annexation constitute a stumbling block in the way of achieving a just, comprehensive and lasting peace in the region.”

They are not only blindly ill-informed at the UN, they are certifiably insane.

Someone needs to knock on their door and tell them about Islamic State, Al-Nusrah, the slaughter of Christians, Muslims, Yazidis and Kurds by international meddlers but mostly by the murderous Assad regime.

If there is anywhere on the Syrian border where peace and justice reigns, it is Israel’s presence on the Golan Heights.

If the immorality of these resolutions wasn’t bad enough, not one European nation voted against the Syria- Golan-peace resolution. Not one!

So, while the world is going to hell in a hand-basket, according to the UN it is Israel maintaining a peaceful Golan that is driving them there, and liberal democratic Europe is their navigator.

The United Nations has become the mad-house of international diplomacy and its inmates keep proving, over and over again, that they are certifiably insane.

Barry Shaw is the Senior Associate for Public Diplomacy at the Israel Institute for Strategic Studies.
He is also the author of best-selling ‘Fighting Hamas, BDS and Anti-Semitism.’   www.barrysbooks.info

Posted by theviewfromisrael.com at 13:02 No comments:

The umbilical cord of Palestinian love and Israeli hatred.

I have never met anyone, apart from Arabs who describe themselves as Palestinians, who really give a genuine damn about the Palestinians unless it is linked by an umbilical cord to the hatred of Israel.
Somehow the two things are welded together to the extent that you have to think what comes first - the Palestinian chicken or the Israeli egg.

Their professed love of Palestinians is selective. They only love them if Israel is lurking there somewhere in their narrative.
They don't actively love them if Syria, Egypt, Jordan, Kuwait and other Palestinian abusers are in the picture. Then they go silent. I wonder why.

No BDS campaigns against Egypt for their blockade on Gaza. No pro-Palestinian protests outside Syrian embassies for their wholesale slaughter of Syrian-based Palestinians. BDS has nothing to say about Apartheid-Jordan that has kept Palestinian Arabs stateless, actually in refugee status, since 1948. No peep even against the Palestinian Authority that maintains refugee camps in the territories that they control and administer. How can you be a Palestinian refugee when you live under the control of the Palestinian Authority? Go figure, because I don't have the answer. Perhaps BDS does.

People who don't care about the Kurds, Yazidis or Druze yell and scream about the Palestinian condition. Those who do nothing to help Tibetans overcome Chinese oppression, those who merely cluck about Rwanda, Sudan, and Darfur, suddenly discover the Palestinian cause.

If occupation is their schtick how come they do nothing to protest Turkey's occupation of northern Cyprus or Morocco's occupation of Western Sahara?  Why no boycott campaigns against the two hundred countries that have an occupation issue? How come it's only Israel that makes them mad?

This professed love for the Palestinians goes hand in hand with a professed hatred of Israel..
The deep hatred that festers against Israel, and I talk about deep hatred not criticism, is all about Israel being the nation state of the Jewish people.
It is an exclusive despicere that goes against all reason and logic, and it shows itself in the falsehoods, the perversion of facts, history and the blood libels that we Jews are so familiar after centuries of similar defamation.

These allegations and assaults are not perpetrated to promote the establishment of a Palestinian state but the destruction of a Jewish one.

Posted by theviewfromisrael.com at 11:33 No comments: 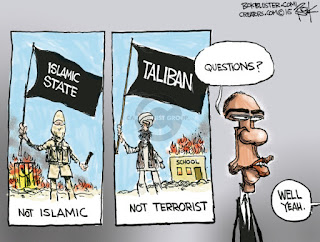 Historically, the President of the United States wears the title of “leader of the free world.” Barack Obama, in his presidency has relinquished that role almost gleefully.  As a result, the world is a far more dangerous place.

Charles Crawford, former British ambassador to Sarajavo, Belgrade and Warsaw, said in an article in PunditWire on 16 June, 2013, that Obama’s Cairo speech “set the stage for Egypt’s disaster,” meaning the overthrow of President Mubarak and the election of the Muslim Brotherhood.

President Obama is the personification of leftist progressive ideology totally out of step with harsh reality. It is a faulty policy of denial, of cover up. Making nice doesn’t make it nice.

President George Bush said in the aftermath of 9/11 that, “if America shows weakness and uncertainty there will be as drift towards tragedy. This will not happen on my watch.”  It did happen on Obama’s watch.

What is happening with ISIS in Syria and Iraq, with the spread of Hezb’allah, with the confidence of Hamas and the rejectionism of Israel by the Palestinian Authority, are all consequences of Obama’s feckless foreign policy.

Obama called ISIS “a JV team” earlier this year. As we see the spread of ISIS into Africa and Europe, Iran celebrating the death of sanctions and boasting about their intercontinental ballistic developments, and Russia encroaching into the Ukraine and picking up the Syrian thread dropped by Obama, it appears to an outside observer that it is the Obama Administration that is the JV team.

Let me make it clear to Americans. What you see in Syria, Iraq, with Russia and Iran are not away games. This violence gets exported to Western soft targets as it was in Paris. And, to its enemies, America is the grand prize, and the enemy is playing the long game.

In his own JV moment, Secretary of State, John Kerry, said of the alleged death of ISIS English speaking beheader, known as Jihadi John, “with the death of Jihadi John we are winning and ISIS is losing.”

The slaughter of over a hundred people in Paris just two days later emphasized the pathetic dream world of the US Administration.

The denial that America and the West are at war with Islamic jihad is the prime cause of the weakness in confronting a brutal and determined enemy with a global goal of Shariah law and an Islamic caliphate. This war in nothing new, as a forgotten chapter in American history has been revisited in Brian Kilmeade’s new book Thomas Jefferson and the Tripoli Pirates. He reminds all who will listen that America waged a war against jihad two hundred years ago and that war, despite the White House whitewash, is being waged against America even stronger today.

When Putin announced he was sending troops and equipment to back up Syria’s Assad, he did it the day after he met with Obama – without telling him in advance that this was his operational plan. At a town hall meeting at Fort Meade, Maryland, on September 11, 2015, Obama talked of a conversation he had with Putin “ four or five years before” in which he advised the Russian leader that is was wrong to provide financial support and arms to Assad. He complained that Putin didn’t listen to him. “He did not take my warnings,” is how Obama expressed it. But when Obama had a golden opportunity to apply the “red lines” that he had said he imposed on President Assad on Syria’s use of chemical weapons, he backed down when challenged by the Syrian dictator’s use of these weapons. This was viewed by every player in the Middle East, including Iran and the regional terror organizations, as further deterioration in American strength and a lack of political will to stand by its word.

The Obama/Kerry nuclear deal with Tehran is looked upon as paving the way to the bomb while gifting a radical and dangerous Iranian regime with $150 Billion for terrorism and military build-up. This is exasperating to America’s allies and a confidence boost to the malevolent actors in the region.

To be sure, the US has played a very short losing game in its fight against ISIS. After stubbornly refusing to “put boots on the ground” in Syria, Obama recently agreed to allow fifty soldiers to play an advisory role there in a weak effort to put facts on the ground. To military and security experts this number is a joke. It’s hardly a number that would make ISIS quiver in fear.

When Israel was forced to respond to thousands of missiles and rockets fired by Hamas last year, they flew 5500 air sorties over Gaza during the fifty-five days of the conflict.  US planes have barely flown 1500 sorties in over a year against ISIS. This, to any military chief, is not serious.

With Russia and Iran displaying muscle, with nefarious Islamic terror armies marching over the Middle East, Africa, Yemen, and attacking and killing European and American targets, the United States and the world are in worse shape today than it was after 9/11.

America has had the blessing of time that is has not suffered the same slaughter we have seen in Paris. It is time to kick political correctness out and call it for what it is.

It is certain that what we saw in the French capital is coming to America. It is predictable. You do not deflect the aims of the enemy by being nice. You do not stop them by surrendering to their demands. America withdrew from Iraq, yet ISIS rolled in to grab major tracts of territory, stole assets, killed, raped, and turned hundreds into slaves. America visibly refused to meddle in Syria, yet ISIS laid down its headquarters there to metastasize into a global Islamic network of evil and death.

France’s President Hollande said, “We will lead a war without pity.” This is the new PC for democracy. It’s a pity he said it the day after Paris and not the months before.

It is a pity that the American president hasn’t said it at all.

Barry Shaw is a Senior Associate at the Israeli Institute for Strategic Studies.

Posted by theviewfromisrael.com at 19:14 No comments: