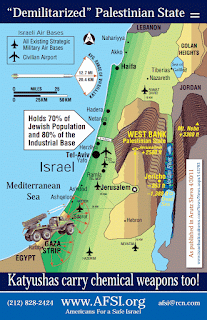 The Israeli Institute for Strategic Studies (IISS), of which I am a proud member and the Senior Associate for Public Diplomacy, is dedicated to presenting hard facts to politicians, diplomats, journalists, think tanks and the general public on issues relating to Israel and its dispute with the Arab world and the broader international community.
By addressing reality and truth, rather than attaching itself to current utopian fantasies, IISS presents clear-eyed analysis of problems and causes and, by doing so, lays bare the shallow proposals meant to solve the Israeli-Arab conflicts.
One such myth is the international desire to create a Palestinian state.
None of the diplomatic proposers have ever addressed the official positions of the various and dysfunctional Palestinian political bodies on what constitutes the territorial sovereignty of such a Palestine.
For this particular exercise, I will confine myself to highlighting the official position of the so-called 'moderate' arm of Palestinian politics, namely the Palestinian Authority who claim to operate under the Palestine National Charter.
It is enlightening to learn over what sovereign territory the Palestinian hierarchy intended to rule. It is even more interesting to learn which territory they disclaimed, rejected, as being any part of a future Palestine.
For answers to these fascinating issues we need to delve into their National Charter of 1964.
Brushing aside, but not ignoring, statements that Israel is illegal, that the Balfour Declaration and the League of Nations Mandate for Palestine are all frauds, that Zionism is racism, the articles dealing with sovereign territory are a guide to the perplexed.
Article 2 reads "Palestine with its boundaries at the time of the British Mandate (the aforementioned 'fraud') is a regional indivisible unit."
Having disclaimed the UN Partition Plan (UN Resolution 181) as "illegal" and as an eye-brow raising read, Article 24 of the Palestine National Charter actually contradicts itself by rejecting the West Bank and Gaza as in any way being part of a sovereign Palestinian state!
Article 24: "This Organization does not exercise any regional sovereignty over the West Bank in the Hashemite Kingdom of Jordan, and on the Gaza Strip" !!!
It is stunning to learn that the Palestinian leadership not only had no intention of claiming the West Bank and Gaza as part of their future homeland, but they expressly and officially excluded them from it as part of any sovereign Palestine!
They did so at the time because they were under the control of the Jordanians and Egyptians. The Palestinian leadership pretended themselves as a national liberation movement but, as Yasser Arafat said, they saw themselves more as part of the Pan-Arab movement to destroy the Jewish State of Israel.
“The PLO is fighting Israel in the name of Pan-Arabism. What you call Jordan is nothing more than Palestine,” Arafat said dismissingly to Italian journalist, Arianna Palazzi, in 1970.
This leaves only one question hanging in the air.
What was, and still is, the intended target and territory of the Palestinian movement to become their national home, and why?