Britain, in or out? A view. 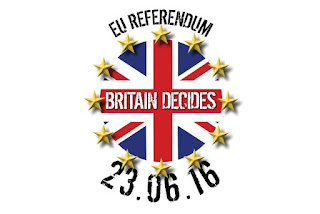 Britain votes on Thursday to stay in the EU, or leave.
Discussions have centered on the economic consequences. Figures have been thrown at both sides of the argument.
The economy and jobs are vitally important issues as Brits ponder their future.
Here is a brief view from an Israeli perspective.

Britain is the second largest economic engine in Europe after Germany. It is an almost three trillion dollar powerhouse. It is hardly a weak horse as, say, Greece.

The biggest card being played by the “Leave” spokespeople is one of a Britain that can regain its sovereignty and begin to control the destiny and decision-making of its own nation.

Should the Brexit vote prevail, Britain will be able to make free-trade deals with massive trading blocs such as America, China and India, something it is unable to do as part of the restrictions of EU membership. This would be a powerful kick starter to the British economy and jobs. Let’s be honest, if Britain is producing goods required within Europe these items will still be in demand by nations within the EU.

Israel, naturally a non-EU country, has an Israel-EU Associate Agreement in force since June 2000. It began with services and the free movement of capital. It didn’t take long for this agreement to expand to include the free trade of industrial and later agricultural products. More recently, the demand for Israeli technology led to Israel being invited into the Horizon 2020 program of research and innovation in 2014. This has led to a thirty two billion Euro trade in goods between the EU and Israel at the end of 2015.

Outside of Europe, Israel’s trade volume with the United States reached thirty eight billion dollars by the end of 2014.

China did not establish diplomatic relations with Israel until 1992. Trade was almost non-existent at that time, barely fifty million dollars. It has leapt in the last decade to reach over ten billion dollars by 2013, and growing fast. Today, Chinese businessman and government officials are constantly visiting Israel in search of partnerships and future trade agreements.

This is the rosy picture that can be Britain’s if it chooses to recapture its independence of action. Surely, British entrepreneurs and innovators are as talented as ours – well, almost.

Barry Shaw is the Senior Associate for Public Diplomacy at the Israel Institute for Strategic Affairs.
Posted by theviewfromisrael.com at 06:23