Palestinian Authority to sue Britain over the Balfour Declaration. 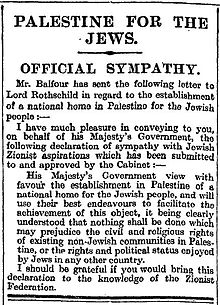 This is so funny you couldn't make it up.
PA to sue Britain over Balfour Declaration!
They can't abide the notion of a Jewish state in the Middle East.
If they think they have persuaded UNESCO, the United Nations Education, Scientific and Cultural Organization that there is no such thing as the Temple Mount, in other words no Jewish or Christian history or heritage in Jerusalem, then the next stage is there is no such thing as Israel as the Homeland of the Jewish People.  So, they are going after Balfour and the British Government.

However, Jonathan Turner and UK Lawyers for Israel have responded;

UK Lawyers for Israel’s response to Palestinian threats to sue the British government over the Balfour Declaration.

There is no legal or any other merit in this claim. The Balfour declaration was not a legal document and did not have legal consequences; it was merely an expression of intent on the part of the British government.
The key legal document was the Mandate for Palestine, which was unanimously adopted by the League of Nations, the predecessor of the United Nations. This provided expressly for a national home for the Jewish People in their historic homeland, to which many had already returned. At the same time the League of Nations also allocated far larger territories in the Middle East for future Arab states under other Mandates. Furthermore the Mandate for Palestine itself stated that its provisions relating the Jewish national home could be disapplied in the majority of its area east of the Jordan river, enabling that to be constituted as a separate state for Palestinian Arabs, now called Jordan.
The rights of the Jewish people to their national home in the land of Israel recognised in the Mandate of the League of Nations are preserved by Article 80 of the UN Charter. Denial of those rights would be inconsistent with the UN Charter and international law.
The Balfour declaration expressed an intention to preserve the civil and religious rights of Arab and other non-Jewish communities in Palestine. Israel has upheld this concept by according equal rights to its Arab citizens, who enjoy far more freedom and a better standard of living and quality of life than Arabs in other countries.