The Consequences of a Failed Palestinian Authority. 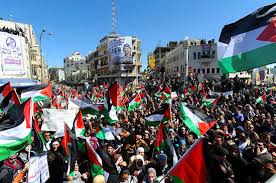 A month ago I wrote an article entitled ‘The Failed State of the Two-State Solution.’ In it, I wrote that “by the ballot or by the ballot Hamas will head any Palestinian state as they did when Israel withdrew from the Gaza Strip in 2005.”

So what has happened in the short time since I released that article?

In Nablus, on August 27, an estimated 120,000 protesters demonstrated against the Palestinian Authority after an Arab was beaten to death by PA security men. Many called for an international investigation into the murder as the Palestinian Authority threatened to arrest some of the leaders of the protest march. The town of Nablus has been described as being in “total anarchy.”

Sporadic violence has broken out in recent days against the Palestinian Authority, often by individuals but also by tribal groups or clans at odds with the increasingly unpopular rule by perceived corrupt leaders.

Universities are the crucibles that produce the next generation of opinion and influence makers. What has flown below the radar of the international community is that, at Birzeit University, the student body overwhelmingly elected students affiliated to Hamas with the Islamic List taking a majority 26 seats against Fatah’s 19. For the uninitiated, Birzeit is not a campus in the Gaza Strip. Birzeit University is located ten kilometers north of Ramallah, an easy march to Palestinian Authority headquarters.

Mahmoud Abbas in Ramallah, propped up by the international community and, by default, the Israeli government, has failed this community by his stubborn refusal to negotiate with Israel, a refusal based on his adamant rejection of living alongside a Jewish state.

He has clearly also failed his own people who elected him back in 2005 and have been barred from expressing their democratic voice ever since.

If truth be told, Arabs living under Palestinian control are angrier at their leaders than they are against Israel.
The proof of this statement can be found in the results of a recent 22 August 2016 poll conducted by the Palestinian Center for Policy and Survey Research which discovered that a majority 68% of the Palestinian population admire Israeli democracy while only 10% of Israelis see anything positive with Palestinian democracy. It is telling that this Palestinian NGO did not ask Palestinian Arabs what they thought of their own leadership and democracy. The result of this vital question would expose the rotten heart of Palestinian ‘democracy’ that is driving people to the streets in protest.

The only way that Abbas can prevent Hamas from using the democratic process to take over the West Bank is to block Hamas affiliated candidates in municipal elections. This is democracy, Palestinian-style.

This brings me to question the shallow mantra of a two-state solution being the only show in town.

Has Kerry, Obama, or Hillary Clinton ever thought their way beyond this empty slogan? Have they ever considered the consequences of forcing Israel to withdraw from essential territory that is rightfully theirs to produce a Palestine that will, inevitably, be controlled by the Islamic terror organization, Hamas?  For this surely is the direction they are taking us.

My criticism is also aimed at the gullible Israeli politicians and Israeli strategic think tanks of the left. They think everything will be hunky-dory by waving a magic wand and declaring any future Palestine will be “demilitarized.”

As Palestinian Arabs head to the municipal polling stations on October 8 (unless they are cancelled), it is sobering to consider the reality of the inevitable collapse of the Abbas Palestinian Authority. It will highlight the continuing myopia of short-sighted diplomats who think they can predict the outcome of their foolish policies.

Of course, if the Palestinian street falls to Hamas in the West Bank, as it did in Gaza, the wailing two-state hoping fanatics will point the finger at Israel, the perennial blame-taker, when it is blatantly the fault of the international diplomatic community that has pumped unconditional billions of dollars into the Palestinians without demanding from them an end to violence and terror, evidence of stability and real democracy, or even an iota of recognition of the legitimate rights of Israel to exist in peace and security. It looks as if its going to be money poured down the Palestinian drain.

As for Israel, it is time to openly debate alternatives to a failed two-state solution before the consequences of a failed Palestinian Authority collapses on us.

Barry Shaw is the Senior Associate for Public Diplomacy at the Israel Institute for Strategic Studies.  He is the author of the best-selling book “Fighting Hamas, BDS & Anti-Semitism.”