A World in Denial. 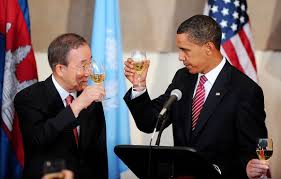 In his UN General Assembly speech, President Obama spoke about “deep fault lines in the existing international order.”  He’s right. He’s responsible for a lot of the mess.

Take the Israeli-Palestinian issue, for example. At the UN podium Obama said, “Surely Israelis and Palestinian will be better off if Palestinians reject incitement and recognize the legitimacy of Israel, but Israel recognizes that it cannot permanently occupy and settle Palestinian land.”

To the uninitiated (i.e. the progressives who live in a virtual world that enables them to block out sounds and truth that invades their cocooned ‘safe spaces’), incessant Palestinian terror launched against Israeli civilians from the Hamas political front based in Gaza and the Fatah political front based in Ramallah is ignored, tippexed out of their song sheet. In their narrative, Palestinian terror and an agenda to eliminate Israel simply don’t exist.

In this mindset, Obama is backed by Ban Ki Moon, the Secretary-General of the United Nations, who sang off the same song sheet.

Yes it is, Ban Ki. It’s madness not to see the violent passion to destroy Israel. He spoke as Israel was enduring yet another weekend of Palestinian terror attacks, eight in number.

It’s madness for them to talk about Israel “illegally occupying Palestinian land” when 2000 year old Jewish coins were recently dug up on land that was evidently Jewish. No mention of Palestine on these ancient coins. How forgetful of them!

Did anyone ever call it “Palestinian land” when, in 1948, the Jordanians in an aggressive war attacked the nascent State of Israel and captured part of the land in a truly illegal occupation. They retained it until 1967 without a peep of protest. No UN resolutions or condemnations about “illegally occupied Palestinian land” against a nineteen year old Jordanian occupation. Only total silence.

If you want to hear three lies in four words try “illegally occupied Palestinian land.” As long as Israel does not build on private land owned by non-Israeli Arabs it’s not “illegal,” it’s not “occupied,” and it’s not “Palestinian land” until we say it is, and no hick talk about “international law” can make it so.

The fanatical obsession of the United Nations against Israel permits it to have one standing order in every session of their Human Rights Council meetings. The laser concentration on Israel in its Article 7 permanent agenda item  condemns all the perceived evils of the world onto the tiny Jewish State while denying enduring massive human suffering the right to receive the attention it needs. Genuine human rights abuses are overlooked as they beat down on Israel.

The United Nations Education, Scientific and Cultural Organization denies the authenticity of its own name when it ignores the architectural, archaeological, literal and historic evidence of the Jewish heritage to the Temple Mount in Jerusalem’s Old City by declaring it to be Islamic, naming it exclusively as “al-Aqsa Mosque” or “al-Haram al Sharif.” Even the Western Wall of the Jewish Temple, until recently called “The Wailing Wall” where Jews wept over the destruction of their holy shrine, is referred to by UNESCO as “al-Buraq Plaza,” after a mythical winged horse.

The global organization and these world leaders follow in the tainted footstep of Mahmoud Abbas who denies the right of Jews to have a nation of their own in their ancient land while denying Jews the right to live in any future Palestine.

After fifty years of failure in trying to impose a two-state solution isn’t it time for these diplomatic experts to wake up to the fact that the so-called Palestinian society is so divided its political chasm looks wider than the Grand Canyon.

So what Palestine are they so desperate to create?  Is it the one headed by the corrupt, undemocratic Fatah rule of Mahmoud Abbas, he of the “Palestine must be Jew-free” and “Haifa, Jaffa, the Negev and the Galilee is Palestine” persuasion? Or is it the one headed by the “Oh Muslim, there’s a Jew hiding behind me. Come out and kill him” Hamas regime?

Either way, by the ballot (if they should ever hold free and open elections) or the bullet (a more likely outcome if Gaza is an example) Hamas would inevitably usurp control of this Palestine should Israel be foolish and retreat to a defenseless slim coastal strip wedged between a lethal Hezbollah in the north, a rampant Hamas in the south and a seething new entity, a forced creation of a blind, deaf international community who chooses not to use their Realpolitik spectacles and see things as they really are, to the east, a short fifteen minute car ride from the cliffs of the Mediterranean, and within RPG range of our major Ben-Gurion Airport, not to mention having us poor suckers sharing  a capital with these malcontents.

Anyone who thinks that the imposed creation of a Palestinian state will turn these people ,with an ongoing agenda for the termination of the Jewish state, into liberal democrats is in such a radical form of denial that they need psychological therapy.

Anyone who thinks that such a state will remain demilitarized for longer than five minutes is delusional. What, you mean demilitarized like the Gaza Strip, or southern Lebanon that was supposed to be patrolled by United Nation peacekeepers. Peacekeepers? Give me a break!

The problem is that these career politicians have mortgaged their personal and professional prestige to the cause of a Palestinian state and they will discover, after they have forced yet another rabidly anti-Semitic, Islamic regime onto the world they will cover their embarrassment by washing their hands of any responsibility for the inevitable inability of a Palestine to be a pragmatic, peace-loving democracy.

Why should it? Show me one Middle East regime that is a tolerant liberal democratic society sharing the free values of the West and Israel. So why is Palestine being touted in the highest diplomatic circles? What is the inevitable outcome of such a phenomenon? Polls, surveys and historic evidence show us that it will be a repressive regime that will not abandon their determination to continue their struggle to liberate the rest of Palestine (i.e. Israel).  This is why they continue to call Israeli Arabs “Palestinians of the Interior.”

When they insist that Israel must sign a deal with Abbas, make dangerous concessions to him and then let the chips fall where they may, what they are ordering us to do is to go to bed with Mahmoud and wake up in the morning with Hamas.

The international community headed by President Obama and Ban Ki Moon may be in denial, but Israelis, having to deal with the real and gruesome facts on the ground, are not.

Barry Shaw is the Senior Associate for Public Diplomacy at the Israel Institute for Strategic Studies.
He is the author of “Fighting Hamas, BDS and Anti-Semitism.”