If you want to study the weakness of American foreign policy under the Obama-Clinton-Kerry Administration, just look at the Turkish-Kurdish-Syrian triangle.

America’s formal position is that it opposes the Assad regime, that it looks on Turkey as a close ally, and that it arms the Kurds in their fight against ISIS.

ISIS is considered a potentially major threat within America and must be eliminated. The Kurds have been the bravest, boldest fighters against Islamic State. Yet, recently Vice President Biden, during a visit to Turkey, demanded that the Kurds return back over the river from Syria into Iraq.  The Kurds were the first and only force that took on ISIS in Iraq on behalf of the slaughtered Yezidi people. They were the first to win significant victories and drove much of ISIS back into Syria where they pursued them.

What Biden seems to be unaware of is that Kurds have always had a presence in Syria and, if America is genuine about seeing the end of Assad, the Kurds are the ones that America should be supporting in the joint effort to rid the suffering Syrians from the cruel reign of Assad and the world of the abomination of ISIS.

Biden was also silent about Turkey who sent tanks and troops over their border into Syria to attack and kill Kurdish fighters who are there, at great risk, to annihilate Islamic State.

Furthermore, there is something pathetic about Pentagon officials rebuking Turkey for going after the Kurds both in Iraq and Syria and then watch Turkey ignore them and continue targeting the Kurds.

As Eran Lerman of the Begin-Sadat Strategic Studies Center and an expert on Turkey, put it, “That is very telling on the state of US authority right now.”

As Herb Keinon wrote in the Jerusalem Post, “Turkey’s move I n Syria against US-backed Kurdish forces who have fought against Syrian President Bashar Assad and Islamic State is more evidence that the US right now carried little strategic weight in the region.”

Lerman agrees. “The will of the United States of America has rarely carried less weight than it does now in regional affairs. And that means that those of us who worry about regional stability have to work together for ourselves.”

It’s complicated, but the US should tell the Turks to lay off the Kurds. Biden told the Kurds that they could be left without American support and defenseless to face Turkish planes, artillery and tanks if they pressed further into Syria against ISIS. How wrong-headed is that?

America also gave Turkey close air support in the first two days of their incursion into Syria until they discovered the Turks were going after the towns and villages near Jarabulus. This is where Kurdish-led Syrian rebels are located.

Understandably, the Kurds are furious with American inconsistency.
It does look as if the Turks see that America needs them more than they need America.
This is evident following Erdogan’s recent meetings with Putin, the Chinese President and the Iranian Prime Minister. 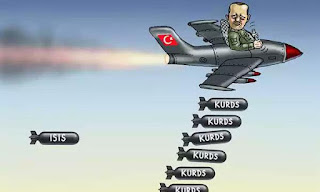 The United States needs to get its act together, or vote in a very different Administration.

Barry Shaw is the Senior Associate for Public Diplomacy at the Israel Institute for Strategic Studies.
Posted by theviewfromisrael.com at 19:48