The New Face of Hamas. Even worse than the old one. 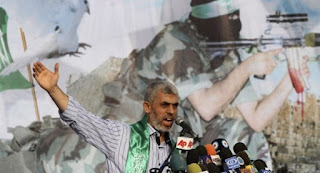 What is ignored by people advocating a two-state solution is the clear and present danger of Hamas in the West Bank.

Evidence of that has been seen at Bir Zeit University where Hamas-affiliated students overwhelmingly won the student body election in February 2017.  [1]

The Palestinian Authority is busy arresting Hamas members [2] and the Israeli security forces are constantly intercepting Hamas terror cells and arresting their budding terrorists in the West Bank. [3]

55 year old unrepentant Yahya Sinwar served 22 years in an Israeli prison on serious terrorism charges. He was released as part of a huge scale prisoner release for the return of imprisoned Israeli soldier, Gilad Shalit. Among Sinwar’s offences was the killing of Palestinians who he called “collaborators.”
He ordered the killing of a senior Hamas commander without trial because he perceived him to be a potential rival and traitor.

He comes to political power from the military wing of Hamas, the Izz a-Di al-Kassam terror group with links to the extreme Islamic Salafist movement.  He is close to Muhamad Deif, the chief of Hamas operations in Gaza considered to be the Chief of Staff of the Hamas terror army.

It is apparent that the radical terrorist arm of Hamas now controls the political wing. Sinwar opposes any compromise with Israel.

This arch-terrorist in Gaza may be matched by a similar hard line Fatah candidate in Ramallah.

These are not benign activities for Rajoub. He uses sport as a political football to try and expel Israel from FIFA, the world governing body of soccer, by bringing allegations against Israel to FIFA forums, as does the PA  at the UN. But behind this diplomatic posture lies the real face of Rajoub who promotes and glorifies terror through Palestinian sports competitions, inculcating the youth to look on murders as heroes to be emulated.

One example is Muhannad Halabi who stabbed a father to death in Jerusalem in October 2015, stabbed the mother and a two year old child and killed an Israeli man who tried to help the family before he was shot and killed by police.

This then is the leading candidate to head the Palestinian Authority and potentially a new State of Palestine if the two-staters get their way.

The other leading candidate is Marwan Barghouti who is serving five life sentences for murdering Israelis. While in prison he has been calling for further terror attacks against the Jewish state. Yet, he is considered a folk hero to Palestinians.

The two headed pincer movement of a terror-loving Palestine will not become nut crackers given statehood.  They will continue their stated ambition to annihilate Israel by stages.

Anyone who thinks that an Israeli withdrawal from essential territory and this type of Palestine will bring peace and harmony is delusional.

This is the new face of Hamas. This is the hidden face of the Palestinian Authority.

This is the future face of Palestine should the two-staters get their way.