The Anti-Semitism of the American Left. 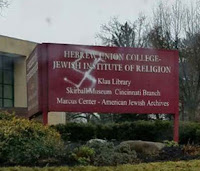 Remember the hysteria at the start of March over a wave of bomb threats to Jewish Community Centers and the desecration of graves in Jewish cemeteries?
A plague of swastikas scrawling on Jewish buildings has been going on in America since November 2016. The blame was always dumped on Trump.

The wild rhetoric put the blame on white supremacists, neo-Nazis, alt-right racists, anyone coming to the surface in the wake of Trump’s rise to power. This level of Jew-hatred could not be put at the feet of liberal progressives who are wedded to diversity, love, and peace.

Weeks later the perpetrators of many of the anti-Semitic acts are known to us so it is enlightening to learn who they are and why they did it.

Juan Thompson is an African-American journalist charged with cyber-stalking and a half dozen bomb threats against Jewish targets. 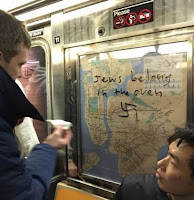 In Arizona, the case of a vandalized menorah twisted into the shape of a swastika was put down to an African-American teenager and some of his gang members.

The FBI, together with Israeli police, tracked down the perpetrator of almost all of the JCC bomb threats. He was a US-Israeli teenager, a computer nerd who, according to his lawyer, is suffering from behavioral problems due to a brain tumor.

So there you have it. The result of police and intelligence work has reduced the culprits down to a teenage Jew, a black journalist, black teenagers and a Hispanic. How is that for diversity?  Their profiles of these characters point to diverse types more likely to vote Democrat rather than Republican.

Although no one has yet been arrested for the Jewish graveyard vandalism if the pattern is repeated we are likely to see that the anti-Semitism which is the rationale behind these hate crimes belongs to the left of the Republican Party.  The media, strongly in the Democratic camp, has gone silent. Their investigative reporters have put down their pens refusing to expose where the guilt lies for these acts of Jew-hatred. They were quick to hurl accusations at President Trump. They simply couldn’t keep their powder dry until the evidence was in.  It follows their failed accusations that Trump colluded with the Russians during the presidential campaign to which there is no evidence.

The truth is that people on the Democratic side of the American political divide are guiltier of acts of Jew-hatred and there is a problem with the anti-Jewish attitude of African-Americans and Hispanics.

The statistics of hate crimes in America clearly show that the main class of victim are Jews, far more, for instance, than Muslims.

Anti-Jewish hate crimes have risen year on year according to Anti-Defamation League statistics. So this phenomenon is nothing new. The main leap in anti-Jewish offenses occurred during the Obama Administration and nobody, except ADL, spoke up about it.
Because Nazi-symbols are scrawled on synagogues and Jewish community center walls, gravestones, train stations and carriages do not mean the daubers are neo-Nazi rednecks. In the month of March, they have proven to be Hispanics and black Americans.
Rather than point accusing fingers at the incoming president the American Jewish community together with local and national leaders of the Democratic Party should do some serious soul searching and investigation to root out the Jew-hatred that is festering on their side of politics.

Barry Shaw is the Senior Associate or Public Diplomacy at the Israel Institute for Strategic Studies. He is the author of ‘Fighting Hamas, BDS and Anti-Semitism.’