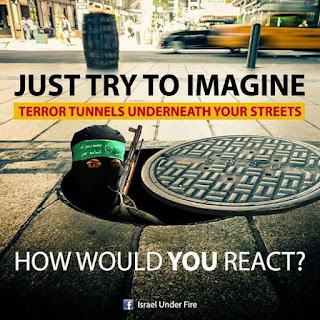 The Israel Comptroller published his report on the leadership conduct of the military, political and intelligence echelon before and during the 2014 war imposed on Israel by Hamas in the Gaza Strip.

Prominent in his report were the issues surrounding the Hamas tunnel threat. It accused the political and security establishment of gross failures though stating that none required career-ending investigation.
The report was quickly followed by the predictable but unseemly finger pointing as prominent people and agencies jostled to absolve themselves of blame.

Sifting through the weeds it is clear that the rivalry between the military intelligence and the Shin Bet security apparatus, although both making great efforts to gather quality information, did not present the severity of the developing tunnel threat to the cabinet members in the national security committee. Neither were the shortcomings and intelligence gaps in and between the two intelligence branches about the situation in Gaza in general and the tunnel threat in particular brought to the attention of the security cabinet. But neither did the cabinet under the Prime Minister demand to know the significant dangers and size of the tunnel threat.
Prestige and ego, it seems, played a negative role in Israel’s security posture.

Clearly, the Hamas tunnel threat continues today. Seventeen known tunnels remained intact after Operation Protective Edge. Israeli military intelligence has no idea how many new ones there are and in which direction they are running.  Despite a huge investment of six hundred million shekels the science and technology of tunnel detection and destruction still lacks an optimal solution leaving the residents of the border communities living in fear and uncertainty.

This leads us to another critical question.
If the accurate locations of terror tunnels were detected would the world tolerate a large scale military incursion into Gaza to search and destroy them? Based on the massive condemnation that Israel receives from fraudulent claims and specious allegations this is highly unlikely. This leaves Israel with the limited choice of living with the unbearable anticipation of a sudden terror attack or incurring international wrath by inflicting occasional surgical air strikes which, according the military analysts, damage but not destroy lengthy underground tunnels.

And what of Lebanon?
Northern residents of Israel are complaining of suspicious sounds under the feet. The army came to investigate, didn’t find anything and told the concerned citizens to relax. But the IDF knows from their last incursion into southern Lebanon that Hezbollah has built an elaborate maze of strategic terror tunnels that make Hamas’s underground excavations look like rabbit warrens by comparison.

Can Israel unilaterally send troops into Lebanon on a mission to search out and destroy tunnels for the safety and security of its citizens? Would the international community tolerate an invasion of another state’s sovereignty in the name of self-defense? Not likely.

Which brings us to Palestine.
Several Israeli military and security experts have written that Israel need have no fear from a ‘demilitarized’  Palestine following the signing of a two-state deal. Can we believe them?

We believed them prior to the fateful Yom Kippur War when they told us that the Egyptians had no intention to attack us. We nearly lost our country. We lost 2412 of our finest young men and officers.

We believed them when they told us it was best to withdraw from Lebanon in 2000 and that UN forces would patrol southern Lebanon and keep us safe. Since then we have been viciously rocketed by Hezbollah who now have in excess of one hundred thousand sophisticated rockets supplied by Iran aimed at our major cities.

We believed them when we withdrew from the Gaza Strip in a vain search for peace.

We believed them as we responded to the war that Hamas inflicted on us in 2104 but now discover that our vaunted intelligence services failed us and our military withdrew leaving more than half the terror tunnels untouched.

No. We have no faith in military ‘experts’ who are trying to assure is that it will be all right to withdraw to borders that Abba Eban once described as “Auschwitz lines.”

Barry Shaw is the Senior Associate for Public Diplomacy at the Israeli Institute for Strategic Studies.
He is the author of a new book ‘1917. From Palestine to the Land of Israel.’