Disturbances at the Temple Mount in Jerusalem and other places broke out over the issue of metal detectors.
“Disturbance” is hardly the right word to describe what has been going on. It is at its heart, a generational battle, a millennial conflict between Islam against Judaism that has continued since the day when Mohammad perpetrated the mass beheadings of 800 Banu Qurayza Jews in 627AD who refused to convert to Islam and were defeated in battle. If you think I am exaggerating, read on...

The recent upheaval was sparked by the terror attack on the holy Temple Mont which led to the introduction of metal detectors to prevent malevolent people from importing deadly weapons onto the holy site. Three Arabs under the influence of the Northern Islamic Movement pretended to be worshipers at the Temple Mont mosques, collected their weapons, and opened fire on Israeli security personnel, killing two Druze officers.

The imposition of metal detectors may be inconvenient but they are hardly a reason for mass riots and individual acts of butchery. These harmful acts were prefaced by deliberate inflammatory incitement from prominent Islamic Wakfs and imams and influential Palestinian and Turkish leaders who promoted false anti-Semitic flames about a supposed change in the status quo of the Temple Mount.

We saw the generational battle played out in our time with the murder of the Druze policemen. The terrorists thought they were killing Jews in a cause they considered legitimate. They were wrong on both counts and their murderous actions lit a spark between Druze and Arabs in Israel. Then came the bloody murder of a Jewish family preparing to greet the holy Sabbath by a 19-year-old Palestinian with a butcher’s knife who broke into their home and slaughtered them.  A Hamas sympathizer, he was inspired by messages of Jew-hating propaganda. 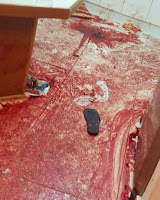 Metal detectors are used without protest outside major mosques in Saudi Arabia, Indonesia, Bangladesh, and India. They are standard fare for Jews going to pray at Jerusalem’s Western Wall and at large synagogues. No violent protests occur against these security measures. They are, however, unacceptable for Jew-hating Arabs when used to protect Muslim worshipers wishing to pray in the two mosques built on the ruins of the Jewish Temple, a place that has become accepted as belonging exclusively to Islam. How’s that for a change in the status quo of this ancient holy site?  The UNESCO vote asserted that this shrine, built by Jewish hands, holy to Jews and Christians, is solely Muslim heritage. Unbelievably, several Christian nations supported this lie and, with their vote, approved this falsehood.

Those driving the narrative of a Palestinian state demand that this must be achieved without the need for them to acknowledge the existence of the Jewish State. Again, the basic principle of establishing a Palestinian state without this essential condition, which is touted as irrelevant, is an integral stage of the generational battle initiated by Arab and non-Arab Muslims.

If the protests surrounding metal detectors had not been so deadly it would have been derisive. Anyone with plain common sense can understand that people using violence and murder perpetrated for the removal of metal detectors are using them as a pretext to continue the smuggling of weapons into their mosques for storage and transfer into the hands of terrorists in a holy cause.

By the same token, anyone with common sense can interpret the imposition of a Palestinian state being prepared to accept the rights of a Jewish State to live in peace in the region is a harbinger of an eventual Middle East without Israel.

Should this happen, it will precipitate the end of the Judaeo-Christian world as we know it. Like it or not Israel, the Jewish State, is the last bastion for the free and enlightened world in a generational struggle.

The removal of metal detectors at the Temple Mount is a metaphor for the dismantling of our collective self-defense and an expression of our vulnerability to violent and noisy threats.

Barry Shaw is the Senior Associate for Public Diplomacy at the Israel Institute for Strategic Studies. He is the author of ‘Fighting Hamas, BDS and Anti-Semitism.’
Posted by theviewfromisrael.com at 15:49