A Letter from Golda Meir 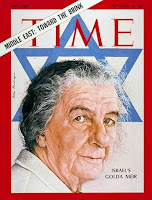 Golda Meir sent a letter to the New York Time which was published on January 14, 1976, 42 years ago.

It makes for fascinating reading today

“Golda Meir, on the Palestinians”

When in 1921 I came to Palestine – until the end of World War I a barren, sparsely inhabited Turkish province – we, the Jewish pioneers, were the avowed Palestinians. So we were named in the world. Arab nationalists, on the other hand, stridently rejected the designation. Arab spokesmen continued to insist that the land we had cherished for centuries was, like Lebanon, merely a fragment of Syria. On the grounds that it dismembered an ideal unitary Arab state, they fought before the Anglo-American Committee of Inquiry and at the United Nations.

When the Arab historian Philip K. Hitti informed the Anglo-American Committee of Inquiry that “there is no such thing as Palestine in history,” it was left to David Ben-Gurion to stress the central role of Palestine in Jewish, if not Arab, history.

As late as May 1956, Ahmed Shukairy, subsequently head of the Palestine Liberation Organization, declared to the United Nations Security Council, “It is common knowledge that Palestine is nothing but southern Syria.” In view of this, I believe I may be forgiven if I took Arab spokesmen at their word.

Until the 1960’s, attention was focused on the Arab refugees for whose plight the Arab states would allow no solution though many constructive and far-reaching proposals were made by Israel and the world community.

I repeatedly expressed my sympathy for the needless sufferings of refugees whose abnormal situation was created and exploited by the Arab states as a tactic in their campaign against Israel. However, refugee status could not indefinitely be maintained for the original 550,000 Arabs who in 1948 joined the exodus from the battle areas during the Arab attack on the new state of Israel.

When the refugee card began to wear thin, the Palestinian terrorist appeared on the scene flourishing not the arguable claims of displaced refugees but of a ghoulish nationalism that could only be sated on the corpse of Israel.

I repeat again. We dispossessed no Arabs. Our toil in the deserts and marshes of Palestine created more habitable living space for both Arab and Jew. Until 1948 the Arabs of Palestine multiplied and flourished as the direct result of Zionist settlement. Whatever subsequent ills befell the Arabs were the inevitable result of the Arab design to drive us into the sea. Had Israel not repelled her would-be destroyers there would have been no Jewish refugees alive in the Middle East to concern the world.

Now, two years after the surprise attack of the Yom Kippur War, I am well aware of the potency of Arab petrobillions and I have no illusions about the moral fiber of the United Nations, most of whose members hailed gun-toting Yasir Arafat and shamefully passed the anti-Semitic resolution that described Zionism, the national liberation movement of the Jewish people, as racist.

But though Israel is small and beset, I am not prepared to accede to the easy formula that in the Arab-Israeli conflict we witness two equal contending rights that demand further “flexibility” from Israel. Justice was not violated when in the huge territories liberated by the Allies from the Sultan, 1 percent was set aside for the Jewish homeland on its ancestral site, while in a parallel settlement 99 percent of the area was allotted for the establishment of independent Arab states.

We successively accepted the truncation of Transjordan, three-fourths of the area of historic Palestine, and finally the painful compromise of the 1947 partition resolution in the hope for peace. Yet though Israel arose in only one-fifth of the territory originally assigned for the Jewish homeland, the Arabs invaded the young state.

I ask again, as I have often asked, why did the Arabs not set up a Palestine state in their portion instead of cannibalizing the country by Jordan’s seizure of the West Bank and Egypt’s capture of the Gaza Strip? And, since the question of the 1967 borders looms heavily in the present discussions, why did the Arabs converge upon us in June 1967, when the West Bank, the Golan Heights, the Sinai, the Gaza Strip and old Jerusalem were in their hands?

These are not idle questions. They go to the heart of the matter – the Arab denial of Israel’s right to exist. This right is not subject to debate. That is why Israel cannot by its presence sanction the participation of the Palestine Liberation Organization at the Security Council, a participation in direct violation of Resolutions 242 and 338.

We have no common language with exultant murderers of the innocent and with a terrorist movement ideologically committed to the liquidation of Jewish national independence.

At no point has the P.L.O. renounced its program for the “elimination of the Zionist entity.” With startling effrontery P.L.O. spokesmen admit that their proposed state on the West Bank would be merely a convenient “point of departure,” a tactical “first stage” and finally, a combatant “arsenal” strategically situated for the easier penetration of Israel.

I am often asked a hypothetical question: How would we react if the P.L.O. agreed to abandon its weapon, terror, and its goal, the destruction of Israel? The answer is simple. Any movement that forswore both its means and its end would by that fact become a different organization with a different leadership. There is no room for such speculation in the case of the P.L.O.

This does not mean that at this stage I disregard whatever national aspirations Palestinian Arabs have developed in recent years. However, these can be satisfied within the boundaries of historic Palestine.

The majority of the refugees never left Palestine; they are settled on the West Bank and in Jordan, the majority of whose population is Palestinian. Whatever nomenclature is used, both the people involved and the territory on which they live are Palestinian.

A mini-Palestine state, planted as a time bomb against Israel on the West Bank, would only serve as a focal point for the further exploitation of regional tensions by the Soviet Union.

But in a genuine peace settlement a viable Palestine-Jordan could flourish side by side with Israel within the original area of Mandatory Palestine.

On July 21, 1974, the Israeli Government passed the following resolution: “The peace will be founded on the existence of two independent states only – Israel, with united Jerusalem as its capital, and a Jordanian-Palestinian Arab state, east of Israel, within borders to be determined in negotiations between Israel and Jordan.”

All allied problems can be equitably solved. For this to happen the adversaries of Israel will have to stop devising overt schemes for her immediate or piecemeal extinction.

There are 21 Arab states, rich in oil, land and sovereignty. There is only one small state in which Jewish national independence has been dearly achieved. Surely it is not extravagant to demand that in the current power play the right of a small democracy to freedom and life not be betrayed.

Golda Meir was Prime Minister of Israel from February 1969 to June 1974.