Corbyn is a Dangerous Anti-Semite.

There can be no doubt that Jeremy Corbyn is a shrewd and canny politician. It takes a special talent to emerge from the radical left of his political party to become the potential next Prime Minister of Great Britain.

He has cannily persuaded disillusioned Britons into believing that he can cure their ills. His rise is a phenomenon that goes against the trend in mainland Europe where, increasingly, populations are ditching failed Socialist governments, particularly over the issue of unbridled mass immigration which is leading to a breakdown of the social and cultural order in many European nations.

Britons, it seems, are prepared to put their concerns about this issue to one side and give Corbyn a chance to sort out the morass that has left a post-Brexit Britain in a quandary.
But how will the sharp rise in anti-Semitism within Corbyn’s Labour Party affect the outcome of a future General Election in Britain?

The greater part of their voters will put this to one side as they are not personally invested in this issue.  There is a growing Labour constituency that will, surreptitiously, be attracted to the party because of this issue. Without naming who they are, they share a deeply felt antipathy to Jews. It’s part of their culture. There is, of course, a healthy section of the traditional Labour Party that abhor recent revelations of Jew-hatred within their party. Some have even admitted that Corbyn is central part of the problem, not the solution. They feel utterly uncomfortable within their party as more revelations come to the fore.

It is apparent that anti-Semitism was lying dormant within the party, and it became emboldened with the rise of Corbyn, a man who displayed tendencies and statements that position him as a latent anti-Semite with associations with individuals, groups, and even international terrorist organisations that exclusively target Israel, the Jewish state, for annihilation, while he and his supporters claim him to be anti-racist. 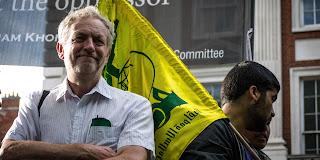 Successful political leaders have scheming minds. They know how to win friends and influence people. The really successful ones also know how to split the opposition and cause confusion and chaos among their ranks to reduce their effectiveness. This is an art that the cunning Corbyn has performed on British Jews over accusations of his anti-Semitism.

His strategy had the desired effect.

Against the rising voice from the leaders of mainstream British Jewry, Corbyn can now claim that some of his friends and supporters are Jewish. Therefore, how could he possibly be called an anti-Semite.

To prove his point, he went further to say that he had “learned a lot from talking to the young Jewish people at the event.”
What he learned was that this group calls Israel “a steaming pile of sewage which needs to be properly disposed of.”  In this, these Jewish anarchists share his anti-Israel views. In truth, Corbyn knew this before he went. That was why he went. He had effectively split the Jewish voice who are now seen squabbling about whether Corbyn is an anti-Semite or not.

Corbyn has a convenient disconnect with facts and truth.  Jeremy Corbyn not only called Hamas and Hezbollah, two Islamic terrorist organizations bent on the destruction of Israel, his friends. In 2014, he went to Tunis to support an event where laid wreaths at the grave of Atef Bseiso, the PLO head of intelligence operations who, among other murderous acts, was the planner of the 1972 Munich Olympic massacre that killed eleven Israeli athletes.

When this embarrassment was exposed, Corbyn wriggled to suggest that he “attended an event where wreaths were laid on the graves of those killed by Mossad agents in Paris in 1991.”  He was right, but he hid the inconvenient truth that he went in support of a terrorist responsible for the murder of eleven Israelis.

Corbyn associates himself with most of the Marxist dictatorships. More recently, the former chair of the Stop the War Coalition was silent about the grotesque chemical attack by the Russian backed Assad regime that killed over a hundred included many women and children, yet was quick to call for a UK review of arms sales to Israel. 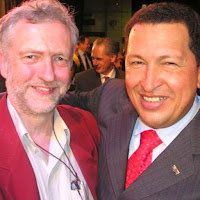 Back in Britain, Corbyn can now sit back and watch British Jewry tear itself apart as Jews from the far-left claim to be, as described by Charlotte Nichols who escorted Corbyn to the Jewda event, “a distinct part of mainstream Judaism.”

Corbyn is an anti-Semite and he is playing the Jews for fools. He embraces Jews who reject Israel and stances those who defend the Jewish state against Palestinian anti-Semitism and their violent obstructionism to Jewish self-determination which are the sole reasons for lack of progress in the Palestinian problem.
Corbyn has now divided British Jews against themselves as the anarchist Jewda group, who claim to be an integral part of British Jewry, also claim, by their embrace of Corbyn, that he is not an anti-Semite.
The leadership of British Jews are confused as they seek a way out of this Corbyn-imposed dilemma. The answer is simple. Jews can also be anti-Semites. With our Jewish genius even this is something we do more passionately and successfully than the goyim.
History is replete with examples of Jews who have turned on their co-religionists and inflicted real harm  on their own people. Spanish and Portuguese Jews betrayed Jews to the Inquisitors and executioners. Some even deserted the faith to become high-ranking archbishops in the Catholic Church. The pathology of Jewish self-hate had had deadly consequences for Jews. It occured a century ago in Europe as certain Jews internalized the negative imagery other had of them and decided to assimilate themselves to those in power by condemning their co-religionists. This is going on today with left-wing Jews who have not only abandoned Israel to its fate but are lining up with Israeli detractors and enemies in finding every opportunity to take shots against the Jewish state, shots they refuse to take against Israel's Palestinian adversaries, or any of the regions evil dictatorships. Among the canards that Corbyn's Jewish supporters are claiming is built on the lies that Zionists ( and therefore Jews) are immoral because Jews stole the land from the Arabs. Even Israelis are pathologically caught up in what has been called Israeli self-hatred. Corbyn has tapped into this display of Jewish self hatred and used it to his advantage.

It is right for British Jews to gather and call out Corbyn, but it now has to deal with both Corbyn, who heads a political party that reeks of anti-Semitism, and also with enemies within its own ranks that are siding with an anti-Semite against the truly mainstream British Jewry. It needs to put its own house in order before it can effectively win this battle. ​

“Criticism of Israel” is a carefully choreographed version of anti-Semitism in the hands of the malevolent, and Corbyn is malevolent. People such as Corbyn use it to disguise their Jew-hatred. This is apparent when one applies the 3D test – Demonization, Discrimination, and Double Standards.

When the Socialist hard left apply their scorn and action against Israel and not against the horrible regimes, including those totalitarian regimes they support or ignore, that is discrimination and double standards. When they use emotive language, one-sided judgments, false accusations, against the Jewish state and call for its elimination, that is demonization.

When a person goes out of his way to honor or justify the murder of Israeli Jews, that is blatant anti-Semitism.  When one employs a tactic or strategy to divide British Jewry, that is the unscrupulous behavior of an anti-Semitic politician.

Apply these standards to Jeremy Corbyn and you can only come to the conclusion that he is a devious anti-Semite who seriously believes that the Jewish state represents all the evils of the world.

I agree and disagree with Alan Sugar, the British business magnate, who wrote a poem of sorts in which he called Corbyn, “a dangerous fool.”

Jeremy Corbyn is not a fool, but he is dangerous.  His brand of anti-Semitism is sinister and toxic.

Barry Shaw is the Senior Associate for Public Diplomacy at the Israel Institute for Strategic Studies. He is also the author of “Fighting Hamas, BDS, and Anti-Semitism” which covers the growing phenomenon of left-wing Jew hatred in support of a Palestinian cause.