Mending broken hearts has become a global mission for Israel’s Save a Child’s Heart. 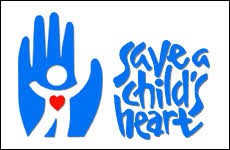 Save a Child’s Heart developed out of two polar experiences, an inspired idea and a sudden tragedy. Such are the diverse parents of much that develops in Israel where hope and death breathe the same air.
In this case, the hope was Israeli born. Death occurred elsewhere, to the Israeli who created the hope.
The hope was to save the lives of babies and young children who, through no fault of their own, were destined for an all too short life, and it grew out of Amram Cohen’s experience as a doctor serving in the US army in Korea in 1988. His job, his vocation, was the give hope to local children with heart disease by the application of advanced surgery, something that was far too expensive for kids living in poverty and in surroundings far too remote from accessible medical facilities and advanced surgery.

Amram’s experience brought him in contact with a network of doctors working in developing countries who, without the major assistance of a nation such as the United States, would be fighting a losing battle in trying to save young lives to heart disease and dysfunction.
Dr. Amram Cohen moved to Israel in 1992 determined to utilize the Jewish State’s advanced medical facilities to try to save children’s lives, children that were suffering from heart malfunctions in locations distant from Israel, including those that had no official contact with the Jewish State.
To the people that loved him, his family and the medical teams that worked around him, Dr. Amram Cohen was affectionately known as “Ami.”
After bringing three Ethiopian children to Israel for treatment in 1996, Ami opened his rolodex of medical professionals and personal contacts to create a volunteer organization to help desperately sick children to whom the chance of life was either not available or unaffordable.
Through a new foundation, he began operating Save a Child’s Heart.  He and other surgeons began treating children with congenital heart conditions mainly at Israel’s Wolfson’s Medical Center in Holon on the outskirts of Tel Aviv.

Children were medivacked into the Jewish State from Nigeria, Tanzania, Congo, Moldova, Russia, Ghana, Vietnam, Ecuador, Jordan, and the Palestinian Authority. From the Gaza Strip more than 150 children came into Israel for medical treatment.
On occasions, Ami and his medical team flew to China and Ethiopia to operate on sixty children too sick to travel.
Hundreds of children were gifted new healthier lives by Dr. Cohen and those who donated and helped the growing global organization of Save a Child’s Heart.
Then tragedy struck. Ami was climbing Africa’s Mount Kilimanjaro with his daughter, Tali, when he was struck down by altitude sickness. He died on August 16, 2001. He was 47 years old.

Save a Child’s Heart could have died with him, but his dedicated team, and many who shared his dream and supported the foundation, determined to keep Ami’s project alive.
Since his untimely death, Save a Child’s Heart has continued and grown. As well as rescuing children with life-threatening heart conditions, it teaches medical personnel in developing nations the much needed surgical techniques required to treat sick children.

Mainstream media channels began reporting on how a small Israeli charity was attempting to heal children with serious cardiac conditions in unlikely countries.
On December 11, 2007, ABC reported, “Israeli charity saving Iraqi children one heart at a time.”  CNN reported on May 20, 2013, “Taking heart amid Syria’s carnage” after a 4-year-old Syrian girl, who would have died without treatment, was saved by the Israeli Save a Child’s Heart surgeons and medical team in the intensive care unit of Wolfson Medical Center.Syria was the 45th nation whose children have been given the chance of a new lease on life by the Israeli charity. Israeli medical teams regularly save the lives of small Palestinian children, including those from the Gaza Strip.

Mending broken hearts has become a global mission for Israel’s Save a Child’s Heart.
In recognition of their remarkable work, for the first time ever an Israeli NGO received the prestigious United Nations Population Award. It was presented to three of Save a Child’s Heart’s leading physicians, Doctors Lior Sasson, Akiva Tamir, and Sion Houri, by the UN Secretary-General, Antonio Guterres, in New York.
Some of the projects scheduled for early 2019 include an SACH medical mission to Tanzania. The team will be performing lifesaving catheterization surgery with their German partners from the Deutsches Herzzentrum Berlin in Dar es Salaam.

Israeli President, Reuven Rivlin, visited the SACH team at Wolfson Hospital on January 14, 2019, and embraced the children receiving treatment there at the time of his visit. President Rivlin was accompanied by several ambassadors on his visit. 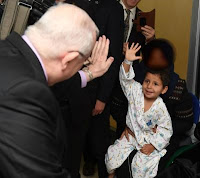 “We often quote the saying ‘he who saves a single life is as if he has saved the whole world’. Behind each heart is not just a child, but a family, friends and community – a whole world,” President Rivlin said. He thanked all those involved with Save a Child’s Heart.


“You know no borders, no race, no religion and no gender. You give your hearts to children in need. It is no surprise that "Save a Child's Heart" has been recognized by the UN. Dr. Ami Cohen, the founder of Save a Child's Heart, died tragically. But you, the wonderful staff and volunteers of this project, keep his mission alive.”

On February 13, a medical mission will go to Zanzibar to screen and diagnose children together with their local partners at the Mnasi Mmoja hospital in Zanzibar.
Save a Child's Heart succeeds through the kind and generous donors, large and small. It is through them that so many children's lives have been spared and improved by willing Israeli medical teams. 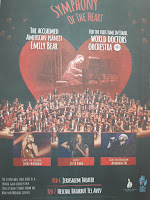 As part of their important find-raising efforts a gala concert will be held in Jerusalem and in Tel Aviv on February 6th and 7th featuring the acclaimed American pianist, Emily Bear, who will perform with the 100-piece World Doctors Orchestra for the first time in Israel. Popular Israeli singers, Shiri Maimon, Ester Rada and Avraham Tal, will also appear.
Other fund-raising events are taking place in the United States. On February 9, the popular Israeli mentalist, Lior Suchard, will entertain an audience at Los Angeles at an evening gala in the Royce Hall of UCLA. On May 6, the Washington DC chapter of SACH will be holding a dinner gala at Bnei Israel Synagogue in Rockville, Maryland. This event will honor the founders of Save a Child’s Heart.
Jeffrey Hoffman, Co-President of SACH-US, told me, “Save a Child’s Heart is an amazing organization. This year we are celebrating the milestone of 5,000 children’s lives saved since the organization was founded by Dr. Ami Cohen in 1996. The dedication and commitment of the Israeli surgeons, medical team, staff, and volunteers from many countries is a testament to the Tikun Olam philosophy that to save one life is to save the world.”

Jeffrey Hoffman is right. What is too little known is that Israel is a shining light of Tikun Olam, the Jewish philosophy of Repair the World, in so many ways, and none shines brighter than the wonderful work being done by Save a Child’s Heart.