Jew-hatred in Ireland disguised as sympathy for Palestinians.

There’s an old joke about a Jew who goes to live in Ireland. When he tells someone he is Jewish, the man asks him, “Aye, but are you a Catholic Jew or a Protestant Jew?”
Tuvia Tenenbom is a film-maker and best-selling author. He writes a series of books about the global pathology against Jews. 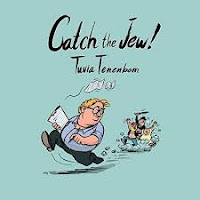 His initial book, ‘Catch the Jew,’ highlighted the anti-semitism behind the often faux support for the Palestinian cause.  This echoes the research I did for my own book, ‘Fighting Hamas, BDS and Anti-Semitism’ about the need to kick back and expose the Jew-hatred that is latent in all aspects of Palestinian support.
Tenenbom and I are kindred spirits.
In preparation for a documentary and new book, Tenenbom visited Ireland and Northern Ireland. To his horror, he found a depth in disdain for Jews, by people who have rarely met a Jew, to be deeper than even Germany.
Tenenbom introduces himself as a German, which he is, rather than as a Jew, which he also is. It protects him from venom and allows the people he speaks with to be more relaxed and natural in their reactions to his questions.
While it may be understandable why the Irish equate the Palestinian cause with their own experiences with the British, the depth of Jew hatred ascends all political issues, which raises the question what came first, sympathy for Palestinian Arabs or hatred of Jews?
Do the Irish really care for Arabs or Muslims, or is it used sparingly and exclusively to promote the Palestinian cause? Is this demonstrated in any other global arena? Or is a rabid Jew hatred at the heart of it, the spark that tilts them to anyone who is terrorizing and killing Israelis, a metaphor for the Jews?
In walking the streets of Derry, Tenenbom was struck by wall murals and displays of Palestinian flags.

He went in search of answers into the nearby Bogside Inn to speak to some of the drinkers. He went as a journalist for German television. In front of the camera he asked,
“Why do you support the Palestinians?”
“Because of the f-------g Jews.”
“Pardon?”
“Because of the Jews. They are the curse of the earth. The only thing that Hitler did wrong, he didn’t kill enough f-----g Jews!”
Tenenbom told Algemeiner, “I don’t think I have met with people who have so much hatred for Jews as I met in Northern Ireland and Ireland, and that includes Derry. The sad part,” he added, “is that I actually like the people here, but most of the people hate me here. I parade around as a German to save me all their hate. It shouldn’t be that way.”
Which begs me to again ask the question, is this support for the Palestinians derived from a comparative history with the British, or is it a religious thing? Is it a lingering Catholic history of anti-Semitism? Or is it a combination of both that inspires them to fly Palestinian flags in the street while ignoring the Kurds, and anyone else with even greater rights to independence?
Tenenbom admits the honesty of their hatred.
Most people deflect their hate into anti-Israel or IDF accusations disguised as sympathy for Palestinians. The readers’ letters columns of most Irish newspapers regularly feature such diatribes. Singularly lacking are any complaints by people who profess to champion Palestinian human rights against the Palestinian Authority who imprison and torture their own people, according to a recent report by Human Rights Watch, or the report from the World Bank that the PA has bankrupted their economy to the tune of a billion dollars by their fiscal irresponsibility of funding their terrorists rather than develop the needs of their people. Palestinian Hamas in Gaza do the same.
The Irish of Derry are straight about it. They hate the Jews more than they care for the Palestinians. You can hear it in their language and in their lack of awareness of the complexities of the Middle East.
Tuvia Tenenbom’s film and his book on Irish attitudes to Israel and to Jews should make for enlightening viewing and reading.

Barry Shaw is the International Public Diplomacy Director at the Israel Institute for Strategic Studies. He is the author of ‘Fighting Hamas, BDS and Anti-Semitism’ and ‘BDS for Idiots.’