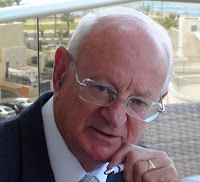 Barry Shaw is the International Public Diplomacy Director at the Israel Institute for Strategic Studies and the author of ‘Fighting Hamas, BDS and Anti-Semitism.’