Which side of the Somali conflict was Ilhan Omar’s father on?

As an Israeli strategist, I have a vested professional interest in exposing the truth about Ilhan Omar and her growing gang of conspirators who intend to be even more harmful to Israel.

They are trouble to Israel and a danger to the United States. 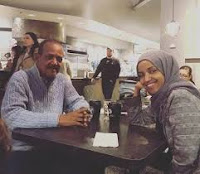 Growing within the Democratic Party is a Red-Green alliance, an American version of the Somali Revolutionary Party of the brutal dictator, Siad Barre, that was based on a melding of Marxist and Islamic theories - the Red of Communism and the Green of Islam.
In Somalia, it was a one party system that nationalized industry and the banks as they established a big government policy promoted as social progress, equality and justice.
Isn’t this what we are hearing from the radical wing of the Democratic Party?
In Somalia, a brutal, intolerant regime brainwashed its people with education programs, broadcasting propaganda over the radio and loudspeakers in public squares, in the schools and mosques. Its failure led to abject poverty and a civil war that included genocide and torture.
As public discontent grew due to the worsening economic situation, the regime cracked down on protest. They arrested, tortured and executed thousands. The propaganda machine blamed the people, calling them traitors. They also blamed the outside world, mainly America, as a corrupt and cruel regime brought the country to bankruptcy.
Those inside and close to the corrupt dictatorship lived privileged lives in wealthy and secure compounds. Those who opposed the regime were hounded, lived in fear and increasing poverty.
Ilhan Omar’s family were among the privileged class in Somalia. She admitted it in her statement that when the regime fell her “very privileged life came to a halt.”
Only those close to, and actively involved in, the regime enjoyed this lifestyle.
Ilhan Omar blames the United States for the ruin of her country, but the Africa Committee of Human Rights Watch wrote a report titled, “Somalia. A Government at war with its own people.”
The UN Development Program wrote that “The 21-year regime of Siad Barre had one of the worst human rights records in Africa.”
An estimated 60,000 people were killed by the regime in the year 1988-1989.
Yet Ilhan Omar has never condemned this Marxist-Islamist nightmare of a regime.
Ilhan has said that her father, who is an influential character in her life, was a “teacher of teachers” in Somalia.
Siad Barre had an extensive and expensive indoctrination campaign.
A teacher of teachers in a regime with a dominant indoctrination program meant educating instructors, teachers and students in Marxist socialist economic theories linked to the principles of Islam, the political and theological tenants of the big government policies of the Somalia Revolutionary Party.
The regime set up the infrastructure to reach the masses, brainwashing them with the message of the regime, and denouncing those who opposed the regime as traitors.
Judicial Watch has lodged a complaint with Congress to investigate the potential immigration, marriage and tax frauds perpetrated by Congresswomen, Ilhan Omar, who site in the influential US Foreign Affairs Committee.
Part of that investigation should get to the bottom of the reports that Ilhan Omar is really Ilhan Said Elmi and that the Omars helped the Said Elmis into America under the fraud that they are part of their extended family, and they did so because, had US immigration known about Ilhan’s father’s connection to the Somali war criminal, they would never had been allowed entry.
To back up this claim, evidence is available showing that other members of Ilhan’s immediate family left Kenya and gained entry into Britain using their correct family name of Said Elmi, that she has a London-based sister, Leila, who goes by the surname of Said Elmi, that she has another sister, Sahra, who returned to Kenya and works under the name of Said Elmi, and, despite her denial of Ahmed, she has two brothers, Mohamad and Ahmed, who use the family name Said Elmi.
Has anyone investigated the roles played in Somalia by the head of the Omar-Said Elmi families before they entered the United States?
Did the Omars know the Said Elmis in Mogadishu due to both families being intimately involved with the regime?
Was her father, as is being claimed, the political commissar under the Communist dictator responsible for the political ideological aspects of the Red-Green revolution in Somalia?
Did they bring their Red-Green ideologies with them into the United States?
Ilhan Omar was not involved in any of this in Somalia. She was just a young girl. But why does she keep the name Omar when other members of her family go by the original family name of Nur Said Elmi? And why do her political theories reflect those of the Barre regime?
Somali refugees in Britain and America can be placed in one of two camps. Those who served the regime, and those who opposed it.
Were the Omars and Elmis on the side of the regime? Human Rights Watch issued a comprehensive report of the atrocities of the Barre regime. Hundreds of witnesses gave evidence of war and human rights crimes of the regime. The influential Omars and Said Elmis were not among them. They have been silent about their life and experiences in war-torn Somalia.
Which side were they on?
The dictator, or the people?

Barry Shaw is the International Public Diplomacy Director at the Israel Institute for Strategic Studies.
He is the author of ‘Fighting Hamas, BDS and Anti-Semitism,’ exposing the anti-Semitism behind every aspect of Palestinian support and anti-Israel behavior.