The biased Palestinian narrative of the mainstream media with their fake news and false imagery was depicted clearly by The Sunday Times reporter, Sarah Helm, in an emotion-drenched portrayal of Gazan, Bilal Masoud.
She painted him as an innocent protester with a slingshot against the mighty military Israeli occupier.
Thanks to Honest Reporting, who published contrasting pictures of Masoud, the truth was revealed for all who wished to see.
Helm described Masoud, "Bilal always took his slingshot: a piece of frayed nylon cord with a patch of Velcro for the stone, which Khalil now keeps. 'It was part of him,' he says, demonstrating how Bilal, who was known as the 'lion of the border,' would stand whirling the cord. I wonder whether 'the lion' ever hit an Israeli soldier. Khalil shakes his head, saying he was lucky if he ever hit a watchtower.'"
Sarah Helm became a Hamas spokesperson who elevated Masoub to martyrdom on a global scale, describing him as "the man who merely 'cut the fence' a small bit.'”
But Honest Reporting went where discredited journalist Helm did not go by releasing pictures of the real Bilal Masoud.
The real Masoud was a 29 year-old armed Hamas terrorist who died of his wounds during border violence.
Here are the contrasting pictures of this Hamas gunman. One showing the image portrayed by Helm and The Sunday Times, and two that the journalist and her biased paper decided not to publish.
You decide which is the real Masoud. 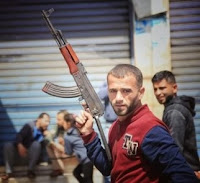 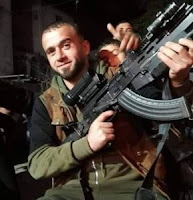