The Challenge for Israel of Proving Innocence in the Age of BDS.

Professor Alan Dershowitz has written a passionate defense as part of his very public effort to clear his name.

Dershowitz was accused of having sex with underage girls during a period when he represented perhaps the world’s most notorious pedophile, Jeffrey Epstein.
One woman, Virginia Roberts Guiffre, filed a defamation suit against the famous lawyer in April 2019, in which she claimed heavy punitive damages based on claims of him having sex with her on numerous occasions when she was under-aged.
Dershowitz suffered further aggravation against his character when a Sarah Ransome alleged that she had participated in a threesome with him at a time when she was employed by Epstein.
Dershowitz was exposed to vile accusations at a time when he was, as he writes in his book, at the apex of his career.
The book’s title is Guilt by Accusation. The Challenge of Proving Innocence in the Age of #MeToo.
The book is the cry of an innocent man prevented from shouting his innocence in the public forum by a wall of opinion that favors perceived victims. In his case, young women involved in a global seedy under-age sex scandal involving lots of money and very important people.
In the public talking-place, too often justice and truth gets lost. Scandal is all. Guilty people are protected. Innocent people get tossed into the broiling pot of publicity. Reputations and lives are ruined.  That is not to say that injured people should not have their day in court.
A major emphasis of Dershowitz’s book is the contemporary experience of an innocent man being swept up by a movement which occasionally leaves innocent men desperately swimming against a maelstrom of public opinion that demands a woman’s complaint be sanctified without question, leaving the accused man to prove his innocence. This is a reverse of normal standards of justice in which the accused is innocent until proven guilty.
One standout example of the “always believe the woman” syndrome was the excruciating spectacle of the Judge Kavanagh Senate Star Chamber in which TV viewers watched a fine and innocent man being pilloried by the inquisitors of the #MeToo Movement and those who hated the President so much they were willing to cast a fine man to the gossip dogs.
That is not to say there are no monsters or innocent female victims. Epstein and Weinstein are just two ugly examples of a very serious problem.
Dershowitz cries out against this movement and the cacophony of media bias that destroys people while promoting titillating claims of women without bothering to thoroughly investigate the legitimacy of their accusations. His whole life, he felt, was being dishonored “because of a demonstrably false accusation by a woman with a long history of lying.”
Dershowitz claims that, when the accusations emerged against him, Meghan McCain, co-host of The View and ABC contributor, demanded that he not appear on TV because he was “accused” of sexual misconduct in the Epstein matter.
The accusation, Dershowitz claims, was sufficient to establish guilt in McCain’s mind to the extent that he was prevented from appearing to protest his innocence.
There was something eerily familiar with Dershowitz’s story. And then it hit me. His story reflects Israel’s experience.

Replace #MeToo with #BDS, and you have the same construct.
Replace “women are innocent and must be believed and all men are guilty until they can prove their innocence, with “Palestinians are innocent and must be believed and Israel is automatically guilty,” and there you have Israel’s dilemma in the age of BDS.
In fact, Israel has experienced the same shocking experience. Talk about "demonstrably false accusations by a woman with a long history of lying," how about what we Israelis and Jews have suffered from the mouth of Ilhan Omar, not to mention from  Linda Sarsour and Rashida Tlaib.
How many Israeli advocates have found it impossible to get a public forum in which to make our case and present our evidence?  How many of you have been hounded off campus and been shouted down by people with raging accusations unwilling to hear your voice?
This has become the challenge of proving Israel’s innocence in the age of BDS, unable to make your case, guilt by accusation.
Today, Israel is guilty, not by facts, history, or legitimacy, but by accusation.

The broad campaign against us, whether by both factions of the Palestinian political movements, by malevolent actors in the UN and EU, by radical lecturers and campus groups, by the BDS Movement and other pro-Palestinian (read “anti-Israel”) groups, have decided and prejudged we are guilty by their false accusations.
They do this because they have an agenda that take no account of Israel’s innocence. They are exclusively bonded to a singular cause. BDS uber alles. Any opposing voice must be threatened and silenced. No rational argument can be made against them. They have prejudged us and will tolerate no defense.
Dershowitz is a lucky man. He is a powerful and successful advocate. His detractors were foolish to take him on. He has access to an unbiased court who will dispassionately hear his case and consider his evidence. Then he is likely to receive justice and compensation for the damage caused against him.
Sadly, Israel does not have that luxury. On the contrary, the “courts” are stacked against the Jewish State.
The UN is just one example of a biased chamber. The ICC is another. Hamas and Palestinian Islamic Jihad launch hundreds of rockets from civilian areas at Israeli civilians and we are the ones accused by this ICC court of committing war crimes in Gaza.
Israel only has the court of public opinion to make its case, and we need an army of Dershowitzs to win our case. 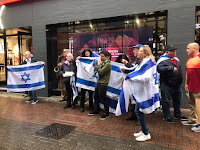 Hope is on the horizon. We are chipping away with victories in a number of campuses, states and countries, who are only now slowly taking up legislation against the discriminatory and racist nature of BDS.  We need a more sympathetic media to support our case.
For Israel, the challenge of proving innocence in the age of BDS is a long and uncharted road.
Barry Shaw is the International Public Diplomacy Director at the Israel Institute for Strategic Studies.  He is the author of ‘Fighting Hamas, BDS and Anti-Semitism’ and ‘BDS for Idiots.’