Philip Haney did not commit suicide. He was murdered.

After his reports were repeatedly ignored, and after he left the DHS, he wrote a book which he scathingly titled, “See Something. Say Nothing,” as a protest of his work being silenced by the administration.
I met Philip in a Tel Aviv hotel in 2019, Philip had arrived in Israel with the United West security group to Israel to learn how Israel was protecting its borders.
I had been invited by Tom Trento to meet the group and I had a private hour-long conversation with Philip. I was amazed, shocked, by his story of an administration that puts political-incorrectness before the safety and security of its people.
This may be happening in America, Canada, Britain and Europe, but there is little likelihood that this would happen in Israel.
Philip’s opinion was that it was an unwritten policy of the Obama Administration to protect suspicious people and organizations spreading radical Islam in America rather than protect Americans.  That it is was part of a presidential promise to fundamentally change America.
Philip blew the whistle on Hillary Clinton’s State Department closing down his investigation into perhaps America’s most radical mosques in Fort Pierce, Florida.
This is the mosque where notorious Sheikh Mohammed preached and from where the Orlando terrorist shooter, Omar Mateen, was indoctrinated. This was also the mosque in which the first American suicide bomber, Monir Mohammad Abusalha, was indoctrinated before going to Syria to drive a truck packed with explosives into a restaurant in 2014.
Although the FBI, CIA, the National Counterterrorism Center and the Department of Homeland Security created a special team of analysts to prevent American jihadists from returning, battle-hardened, from the Middle East, Philip Haney was frequently frustrated by the blocks and restrictions imposed on him by senior officials reaching up to Hillary Clinton and Barack Hussein Obama.
According to Josh Bernstein of Patriot.com media show, had Haney’s recommendations been acted upon it would have “taken down at least seven different international global terrorist organizations and as many as 1311 terrorists in at least eight different countries.”
In 2016, Philip Haney courageously went public by testifying before the Senate Judiciary Committee chaired by Senator Ted Cruz. He alleged that the Obama Administration had acted irresponsibly with regard to Islamic extremism within the United States. Philip claimed that the administration had acted out of “political correctness” rather than take affirmative action that may have prevented the June 2016 Orlando nightclub shooting, or the earlier San Bernadino shooting of December 2015.
At this Hearing, Philip also reported the Obama Administration for destroying or changing eight hundred of his files relating to the growth of the Muslim Brotherhood in America by falsely claiming they were deemed “offensive to Muslim people.”
Philip was open about the information he had collected. He appeared on Trevor Loudon’s Amazon movie “The Enemy Within” talking about what was taking place in America.
While people like Haney were shouting the alarm about the spread of radical Islam in America, there was a growing appeasement to a Shariah ideology and the establishment of a counter agenda within America.
While Obama was calling ISIS in Iraq a “JV team,” the threat assessment from people like Haney went against the narrative of the Obama administration and had to be blocked. 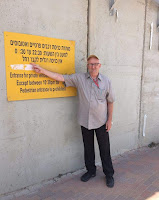 In our hour long chat in Tel Aviv, Philip told me that people wanted to silence him. I thought this referred to the Obama administration closing down his lines of enquiry and resultant database of evidence.
This immediately leapt to mind when I was told that his body had been found on Friday, February 21, three days after he had been killed.
Apparently, some time on Wednesday 19, Philip Haney drove from his house to a remote area, got out of his car, walked a short distance, and shot himself in his check. At least, this was the initial police report after his body was found.
I don’t believe it.
His body was found in an open RV park-and-ride area adjacent to Highway 16, less than three miles from where he had been living in a motorhome park in Plymouth, a small community in California.
Detectives recovered documents, phone records and a laptop from the scene, according to Monday’s news release, and the Sheriff’s Office took possession of his vehicle, the firearm located at the scene, and his RV to be processed and analyzed along with the evidence, with assistance requested from the FBI.
Authorities later retracted initial reports that Philip’s death was by suicide describing it as “misinformation.”
Philip was not a contortionist. Shooting oneself in the chest is almost a physical impossibility.
Investigative reporter and Fox News contributor, Sara Carter, said Philip was someone she deeply respected and considered a friend. She considered his death a murder until she receives confirmation to the contrary.
Glenn Beck feels the same.
So do I.
Haney was a frustrated agent, but I do not believe he was suicidal. The facts back this up.
Philip Haney had a new life to look forward to in 2020. He was to be married again. According to numerous sources, Haney was preparing to return to the Department of Homeland Security to expose what he called the “Red-Green Axis.”  This was something that Philip spoke to me about when we met in Tel Aviv. This is the alliance between the radical left and radical Muslims in a combined agenda to take down Western democracy and civilization as we know it, using terror to unsettle the indigenous population. Failing that, he intended to write a follow up book to his “See Something. Say Nothing.”
This was not the mental state of a potential suicide victim.
Philip Haney did not commit suicide. He was murdered. He was murdered for what he knew and for who he was.
Philip Haney was a brave patriot and he died for his beliefs and his knowledge.
I also considered him a friend.
Barry Shaw,
Israel Institute for Strategic Studies.