One thing that the Democrat Party learned from Barrack Obama are the strategies of the Marxist pair, Cloward-Piven, on how to galvanize community action groups to gain power, and the application of Saul Alinksy’s ‘Rules for Radicals’ against political opponents for the same purpose. In this case the target has been Donald Trump.
The ultimate aim is to gain power, keep it, and change the country, not by giving the people what they want, but by making them dependent on an overpowering government.
Alinsky’s writings are the lodestar for radicals in building militant community organizations in order to gain power. Although not a Communist, his rules are a step ladder to hardened Socialism.
Was it accidental or deliberate that Alinksy invoked Lucifer and the resultant hell as an inspiration?

"The very first radical known to man who rebelled against the establishment and did so effectively that he at least won his open kingdom - Lucifer."
That "kingdom" was hell. Isn't it always when rampant Socialists, Marxists and anarchists get their way?
Hillary Clinton, as a student, was an ardent fan of Alinsky. They exchanged letters.
Perhaps more important to Democrat radicals is the influence of the Marxist activists, Richard Cloward and Frances Fox Piven. The four aims of the Coward-Piven strategy are;

Overload and Break the Welfare System.
Have Chaos Ensue.
Take Control in the Chaos.
Implement Socialism and Communism through Government Force.
Their end game was to totally transmute America into a centralized welfare state. This is being done as I write this by wily operators trained in the Marxism of the doctrine to exploit conditions of overwhelming distress and division through social upheaval and violence, and use that violence to wield influence over local and state leadership, and by leading the people via mass street protests to overturn the system and topple government.
Part of their plan is the suspension of civil liberties, an issue that should scare liberal Democrats, but apparently doesn’t.

Cloward-Piven pinned their ambitions back in the 60s in promoting disruptions within the Democrat Party.
They ruled that mass unrest brings more people onto welfare which was a vital component of their political ideology. To make more people dependent on government.
A political mechanism designed to end poverty via social unrest in the end makes everyone poor.
In America, the Democrats distract attention away from what they themselves are plotting by deflecting their own game onto Donald Trump. It’s a psychological trick. Don’t look at me, look at him.
Example 1. Russian Collusion. They pinned this on Trump after Obama had spent eight years doing just that, colluding with the Russians.
Proof 1. Uranium One in which Obama, with the active help of Hillary Clinton, sold 80% of America’s uranium stockpile to Putin, via dubious Russian companies and Kremlin proxies who donated large sums of money into the Clinton Foundation and gave Bill Clinton $500,000 speaking engagements in Moscow. Russian collusion.

Proof 3.  In a May 2020 Judicial Watch investigation it was discovered that there were 800,000 illegible voters listed in just three Pennsylvania counties. A left wing group submitted a motion to dismiss claiming these were not illegible but merely “inactive,” but this is precisely where the fraud potentially comes in by malevolent actors activating inactive voters.
Proof 4. In preparation for the riots that will surely follow a Trump victory, the same Open Democracy piece deflected the potential violence perpetrated by sore radical losers by deflecting their intentions onto the president;
“Given the tense situation in the country (caused by their own people), it would take only a spark, whether spontaneous or deliberate, to ignite a social conflagration in key cities before the November 3 election.”
Plot and Deflect, par excellence, given that the only “social conflagrations” we witness in America has been initiated by the radical left of the Democrat Party.
What they really are telling us is, despite their efforts to steal an election, if they lose, expect more looting, pillaging, arson and destruction after a Trump victory.
If you think that preparations for vote rigging is a far-fetched conspiracy theory, consider this. 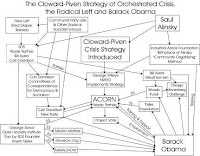 Why is it, do you think, that Barrack Obama has been working for a hundred days in setting up a national network of community organizers to operate local groups of election activists Obama has set up a national campaign with 250 branches and a staff of 32,000 people using a budget, according to the IRS, of tens of millions of dollars, operating out of a HQ in Obama’s Washington, DC, office, headed by Valerie Jarrett, his one-time Iran negotiator. Obama's Attorney-General, Eric Holder, is involved.
Why would a former president, whose legacy has been ruined by the incumbent, spend his time and money to go back to community organizing? As a hobby? Not likely.
Obama is working to swing the election result just as he operated his inner circle of intelligence agencies, FBI and Justice Department, to go after a political opponent. All this will become clear when the hammer comes down on the findings of the Barr-Durham probe into grave misconduct by leading officials of the Obama Administration.
Obama is central in the upcoming Plot and Distract operation to regain power, by using the Cloward-Piven/Saul Alinsky methods he knows and has practiced in the past. And he is not expending all this money and effort just as a favor to his VP.
Plot and Deflect. The Democrats are working to the playbook of Alinksy and the Marxist pair.
“Pick the target, freeze it, personalize it, and polarize it.” Cut off the support network and isolate the target from sympathy. Go after people and not institutions; people hurt faster than institutions.”
“Ridicule is man’s most potent weapon.” There is no defense. It’s irrational. It’s infuriating. It also works as a key pressure point to force the enemy into concessions.’
The target is President Trump as the personification of a Government they wish to overturn.
Plot and Deflect. Watch out! It’s coming to a polling station near you.
Barry Shaw, Israel Institute for Strategic Studies.