The Problem with the Biden Administration.

The central problem with the Biden Administration is that people are not being selected for top jobs based on merit but on gender and race preferences.

This will rapidly lead to gross, even dangerous, ineffectiveness and abuse when linked primarily to advancing woke ideology rather than cost benefit service for the American people.

We are seeing appointees pushing radical agendas in positions and ministries that should be disconnected to issues of race and gender. 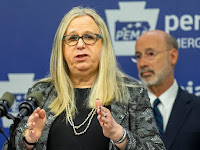 The latest in a long list of questionable appointees is the elevation of Rachel Levine to become the US Health Secretary.

Levine has a more lethal record than NYS Governor Andrew Cuomo for the crime of forcibly inserting Covid infected patients into elderly nursing homes leading to the death of thousands.

Pennsylvania is the most populous state for Covid deaths in nursing homes. At least 50% or more occurred in Levine’s elderly facilities under Levine’s direct orders. These figures are considered to be under-recorded and there are ongoing demands for more transparency by the state.

In Levine's case, she removed her own mother before admitting infected patients into her mother's Pennsylvania facility, a luxury she did not afford other concerned families.

Where Cuomo is, rightly, being investigated and hopefully punished and demoted for his crime, Levine is not only getting away scot free, she has been promoted as top honcho in the nation's health elite.

Reading through Levine’s CV it seems she was more involved with gender, race and transgender awareness in her state yet failed with central issues such as the pandemic in which her state has an appalling record.

The risk to the public of a Health Secretary putting an obsessive trans agenda ahead of other vital needs has been overlooked in their rush to appoints the first trans minister.

In an exchange with Senator Rand Paul in a Senate hearing, Levine refused to admit or deny that she favors indoctrinating children to reimagine themselves becoming a member of the other sex, or assisting them with medical and surgical "benefits" of a physical transition out of their natural sex and into an adopted gender. She parried his searching questions with non-answers.

This brings me to my central point.

The celebration of the advance of people of differing race, culture and gender should not be considered the prime qualification for any nationally responsible position.

It is merit based on actual accomplishments that must be the first qualification, not the second.

Particularly in the service of a country, race, gender and culture must always follow, not lead, the list of priorities required to be a leader. The jury is still out on Rachel Levine.

This balance is vitally important for the physical and psychological health of any country.

Israel seems to have got that balance right. The jury is still out on America, but the omens are not good.