Ilhan Omar. The most hypocritical person ever elected to power. 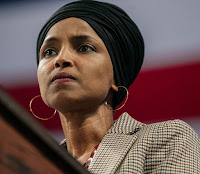 This is what Ilhan Omar tweeted after the killing of 18-year-old police officer William Evans.

“Heartbroken to learn another CP was killed while protecting the Capitol. My thoughts and prayers go out to the officer’s family and the entire Capitol Police force. The death toll would have been worse if the assailant had an AR-15 instead of a knife.”

What pretentious opportunism. How dare she politicize his tragic death before the young policeman was buried.

She has attended protests at which police have been spat at, physically attacked and sent to hospital. She is the one leading the charge to defund the police.

She insults the police every day, and then she comes on all sympathetic to the police to gain points for her demented followers.

Give me a break!

To counter her foolish remark about the death toll being worse if the assailant had an AR-15 instead of a knife, this form of murder is known in Israel as a vehicular terror attack. We are familiar with this form of terror and we know immediately who the perpetrators are and the insanity of their cause.

If Omar was honest, which she isn’t, she would admit that the attack would not have happened at all if the assailant had not been indoctrinated by Louis Farrakhan and the House of Islam.

This is something Omar knows intimately. She is admired by Farrakhan and is a fund-raiser for CAIR, the American arm of the Muslim Brotherhood, implicated in aiding Hamas, the Gaza-based Palestinian terror organization. Ilhan Omar is familiar with this type of un-American belief having been raised by a father and grandfather serving a Marxist Islamist dictator, Said Barre, in Somalia before coming to an America that she hates.

This woman values Somalia more than she values America, and yet they put her on the House Foreign Affairs Committee. 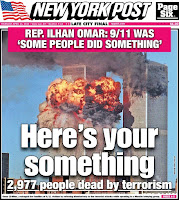 The big difference between 9/11 and what occurred outside the Capitol Building was that 9/11 was perpetrated by foreign terrorists. Officer Evans' killer was home-grown and domestically indoctrinated.

Truth be told, Ilhan Omar values Islam more than she values America. But even this is fake with her.

She married a white guy after divorcing her own brother. Her personal actions are an affront to devout Muslims and to regular Americans. She has proven herself to be an out and out anti-Semite and she hates Israel.

Yet she still sits in Congress. Shame on the Democrat Party.

When will American Democrats realize that they have an enemy of the state and an anti-Semite in their Congress spilling crocodile tears over a dead cop?

The Democrats are silent. They are liars and cheats by protecting this person and her actions that weaken America.

Omar and others sit in their temple and want America destroyed.

And now they are dictating policy in the Biden Administration.